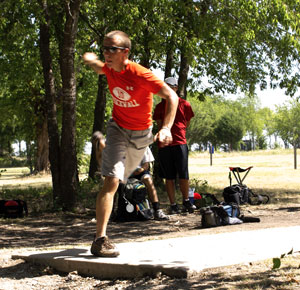 Disc Golf has become one of Caseys main activities as of late. He was introduced to the sport a couple of years ago by some teammates on the Rockwall High School Football team. Casey has begun to take his game to a higher level over the last few months. He regularly competes in local tournaments as well as PDGA sanctioned tournaments. He is a young, up and coming player that wants to take the DG world by storm.

Caseys accomplishments dont stop there. He was key in starting the Rockwall High School Disc Golf Club, which is a club that promotes DG at RHS and competes in state High School tournaments. He and friend Coan Calabrese have also started Big Tymers, a players club that regularly plays together and helps teach players how to improve their game.

“I want to see this sport take over and become something serious.” said Casey recently, “Im not really in this for the money or the fame, I just want other people to find this game and use it for what it is great for.” To add to his resume, he is now running the Saturday Random Doubles at Harry Myers for the Rockwall Disc Golf Association at 11:00 every Saturday, which Life Disc Sports is the exclusive sponsor for.

If you want some new stuff, come on out on Saturdays at 11:00 and join the fun! Part of Caseys goal is to introduce this sport to the masses and show people the power of playing a simple game with friends and meeting some other people in the process. Casey is not only quickly becoming one of the premier players at Harry Myers, he is also trying to do something very few players in this sport are, grow the sport and innovate it at the same time. Check him out at Harry Myers and catch a round with him, you wont regret it!