(In honor of Veterans Day, Planet Rockwall is proud to present the first in what we hope to be a series of recollections and images from Rockwall veteran and photographer Desiree McCombs.)

As the wheels touched down on the rocky gravel strip, the plane shook in protest. Making the trek often from the main base, the CASA 212 aircraft delivered mail, provisions and at times, passengers, to the isolated forward operating base (FOB) run by New Zealand Coalition troops.

It was my first time seeing the magnificence of Bamiyan. For centuries, Bamiyan sat at the heart of the Silk Road and was a hub of Buddhist cultivation. In recent memory, Bamiyan was remembered by many as the location of the magnificent Buddha statues that were cut into the tall, sandstone cliffs. The largest of the statues stood an impressive 175 feet while the second towered 120 feet over the valley floor. These statues had stood since the 3-5th century A.D. and when the Taliban began destroying them in 2001, the international community condemned the action.

The flight took off just before sunrise, so as we approached the FOB, the sun was slowly draping the surrounding cliffs in that initial gold glow of early morning light. It was stunning, and with the help of the monotonous humming of the engines, I lost myself in the moment, in awe of what I was witnessing and the historical significance of this desolate land forgotten in time.

It was the summer of 2009, the Buddha statues had long been destroyed, but the gaping emptiness in the cliff walls left a constant reminder. After landing, I stood with the pilots beside the aircraft while we waited for the coalition troops to unload mail and other provisions.

In that moment, a coalition Humvee zoomed past us on the strip conducting its security patrol. Up ahead, an Afghan woman had appeared from within one of the huts and began to pump water from a well. As the Humvee sped down the runway, she looked up in surprise. It was a clash of two worlds and two different realities. I was able to capture this image and it remains one of my favorites to this day.

Turning and looking back behind the aircraft, I saw what appeared to be a mound of intricate holes and caves. It was Shahr-e Gholghola or ‘city of screams’. It earned that name from the screams of violence that erupted from it when Genghis Khan took siege of the citadel in 1221. I was completely mesmerized by what I was seeing. It seemed as if the ghosts of centuries long past shrouded the ruins in a haunting way.
This valley was magical and full of so much mystery and historical intrigue. Its influence on me is never far from my mind.

Desiree is a veteran of the United States Air Force and Operation Enduring Freedom. She served as a cryptologic linguist and operator aboard numerous aircraft throughout her career. She entered the Air Force about two months after the attacks of 9/11.

During her time as a defense contractor between 2008-2010, Desiree was given the opportunity to be a Dari interpreter when visiting locals outside the base. It was during these visits that she captured some of her most captivating images of Afghanistan.

Originally from Costa Rica, Desiree has travelled the world and has been doing photojournalistic photography for 15 years. She holds a B.S. in Engineering Physics and Mathematics and recently completed her Master of Science in Aeronautical Science.

She and her family moved to Rockwall over a year ago. She resigned as a technology advisor for the military in 2012 and has established Indigo Peaks, LLC here in Texas. Indigo Peaks is a full-service photography studio specializing in weddings and high school seniors.

Her work is currently on display at KE Cellars through this Friday. For more information, please visit her website. 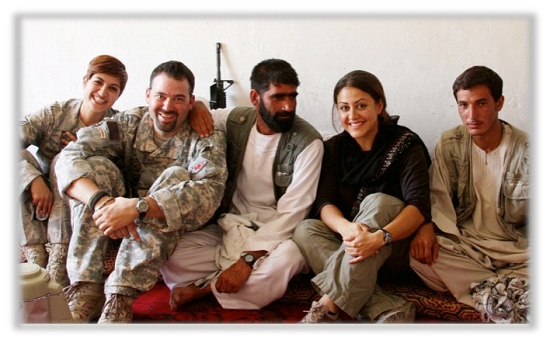 Desiree (fourth from left) with coalition troops and Afghan locals