The ice storm on February 6, 2014 may have kept some residents of Rockwall County at home but MOMS Club of Rockwall’s 2nd Annual Bunco Tournament, a fundraiser for Rainbow Room of Rockwall, was still a runaway success despite the flurries and icy roads. The event resulted in an official donation of over seven thousand dollars.

Rainbow Room Board President Dorothy Burris states, “ The Rainbow Room of Rockwall County appreciates the continued generosity and enthusiastic support from MOMS Club of Rockwall. This donation will help us serve the children in our community who are in the care of the Department of Family and Protective Services. The fundraising proceeds from the extremely successful Bunco Party will assist with the purchase of backpacks and school supplies for the school aged children in DFPS care. The Rainbow Room could not continue, in some small way, to make the lives of these children better without the overwhelming support of community organizations such as the MOMS Club of Rockwall.” 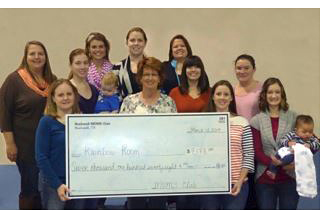