It’s a place where dreams are born and time is never planned. This weekend, Rockwall Summer Musicals is offering tours to this place, called Never Never Land. Your guide: the forever young Peter Pan.

Each season RSM continues to raise the bar on itself. As its reputation as a destination for the arts and entertainment grows, Rockwall draws theatrical talent from all over the Metroplex. As a result, the productions just get better and better. “Peter Pan” represents the culmination of seven seasons of increasingly ambitious projects, and the experience shows.

Having actors flying around and above the stage would have been unheard of in RSM’s early shows. As confidence and skill have grown among production staffers, flying scenes are now presented with aplomb. With as many as four cast members airborne at once, the competence of the backstage crew is breathtakingly evident. 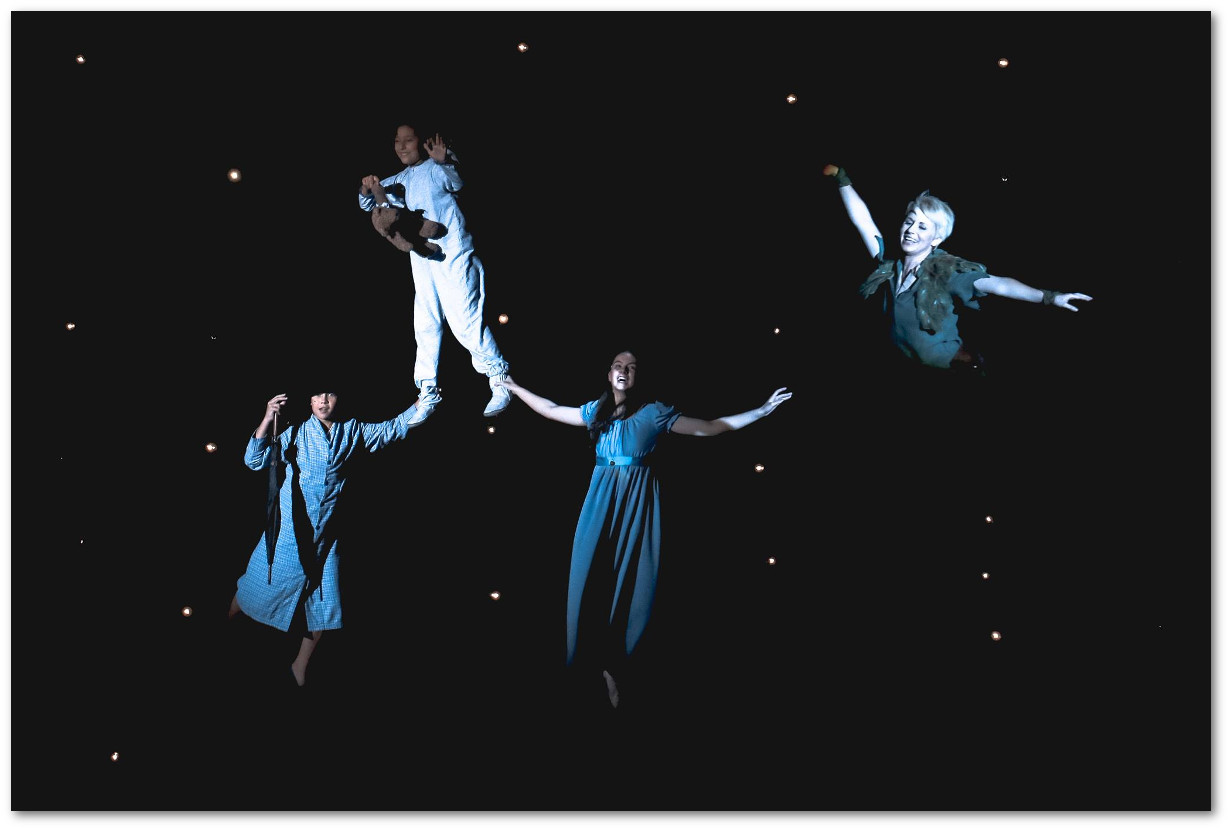 Pan (Molly Pope) couldn’t have been more perfectly cast. The role demands physical agility along with exceptional vocal range and charisma. Molly delivers this in spades. Her portrayal of the boy who won’t grow up is energetic and believable, leaving the youngsters in the audience enthralled and breathless.

The considerable choreographic skills of Suzanne Toler were best displayed by the Indians, led by Tiger Lily (Megan Ann McCullough, displaying her impressive background in ballet). This is where the best dancers in the cast get to shine. Each of their numbers, with their perfectly synchronized movements leaves the audience wanting more. 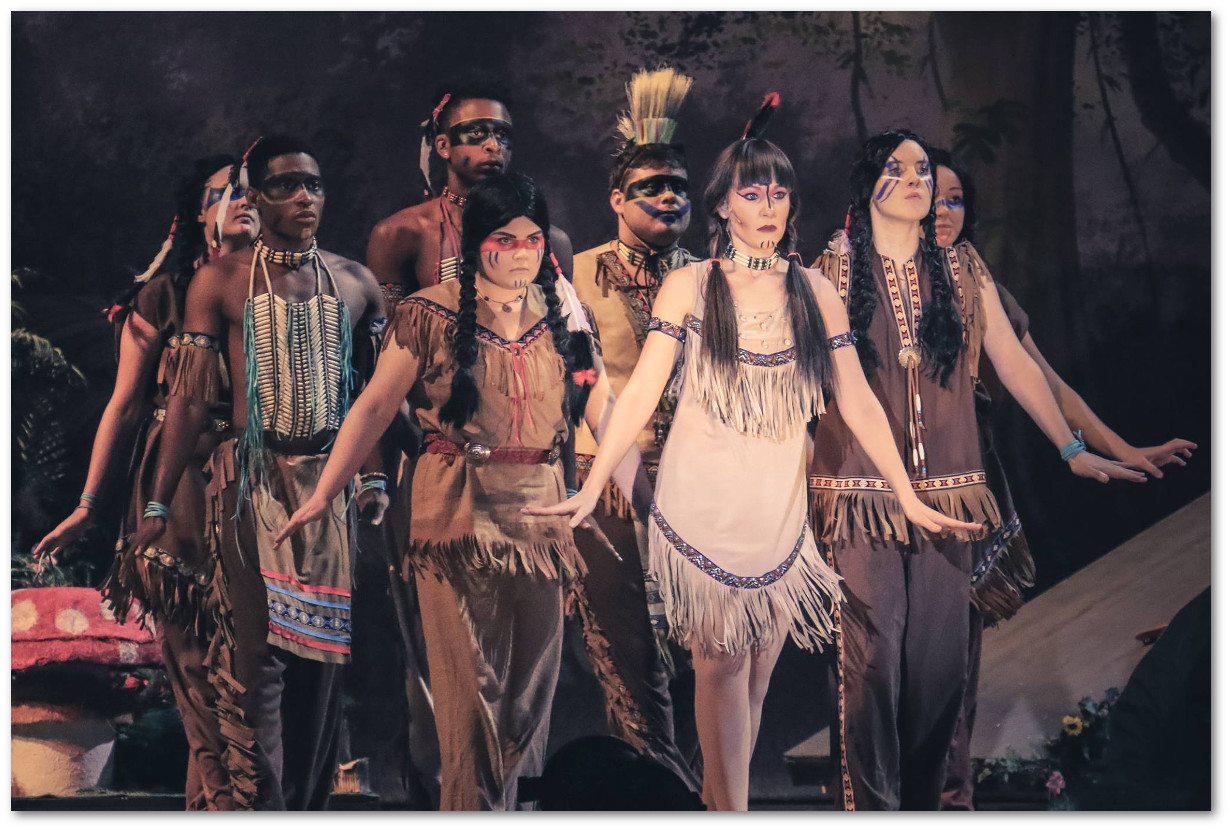 Tiger Lily and her tribe

The pirates, obviously having fun, take turns stealing the show. Their bumbling efforts to capture and destroy their arch-nemesis Peter Pan at the behest of the evil captain almost gets the audiences sympathy, but most certainly gets their laughs.

And then there’s Hook. Ah, Hook, dripping evil with a snarly pomposity, is presented with superb comedic effect by Matthew James Edwards. Edwards brings over 30 years of theatre experience to the role, which by the way, earns Planet Rockwall’s award for best hat in the show.

Opening night glitches are inevitable in any show of this size, and this was no exception. However, most would have taken an experienced eye to notice, given the superb set and lighting design. Trust us, any flaw in execution is quickly nipped in the bud by veteran director Barbara Doudt. 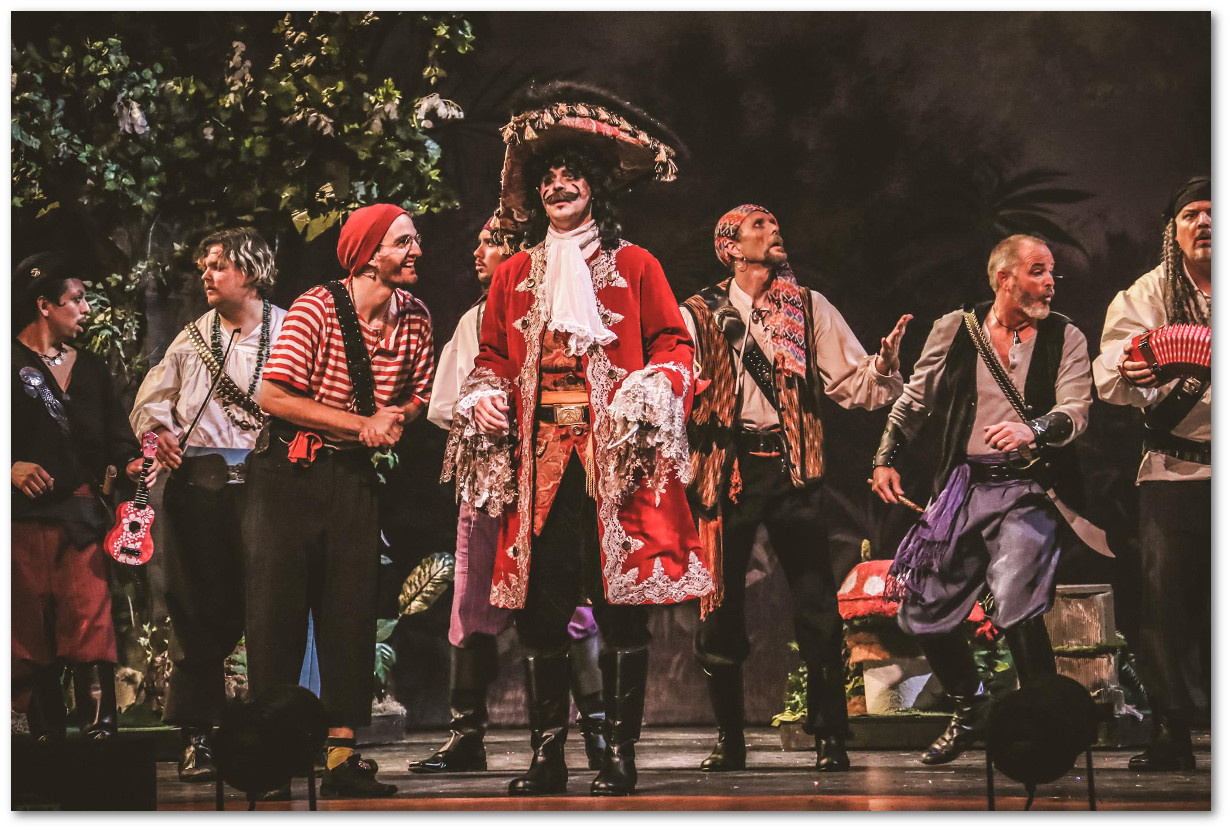 The Captain, the motley crew, and The Hat

The music takes a little time to find its groove, but once the storyline starts to take shape, the orchestra and actors settle into an easy balance. Placing the musicians backstage rather than out in the audience is also a welcome improvement, making for a much more comfortable listening experience.

Parents may be assured that this is one of the most kid-friendly activities you can take them to experience. The show runs through August 20. Tickets are available at the Rockwall Summer Musicals website.