COMMERCE, Texas—On Jan. 28, Texas A&M University-Commerce brought the university community together to pay tribute to the memory of the Caddo Indians who lived in the Commerce area until their relocation to the Oklahoma Territory.

The ceremony was held on the south side of Gee Library at noon with a host of university faculty, staff, students, and members of the Caddo Tribal Council. A&M-Commerce President Dan R. Jones and The Texas A&M University System Vice Chancellor for Academic Affairs Dr. James Hallmark were joined by other university administrators to unveil a plaque honoring the Caddo Indians.

“It really means a lot,” said Maureen Owings, a representative of the Caddo Tribal Council. “The people who lived here were my ancestors, and it means a lot for the university to acknowledge them. It really makes me happy.”

Caddo Indian settlements were once scattered across Northeast Texas. Their homes spanned as far as Southwest Arkansas and Northwest Louisiana. The Caddo Nation established their headquarters in Binger, Oklahoma, after being relocated in 1859. Today, the Caddos are known for their dedication to maintaining their language and other cultural traditions such as pottery, song and dance. The word “Texas” comes from the Caddoan word “Tayshays,” which means allies or friends. 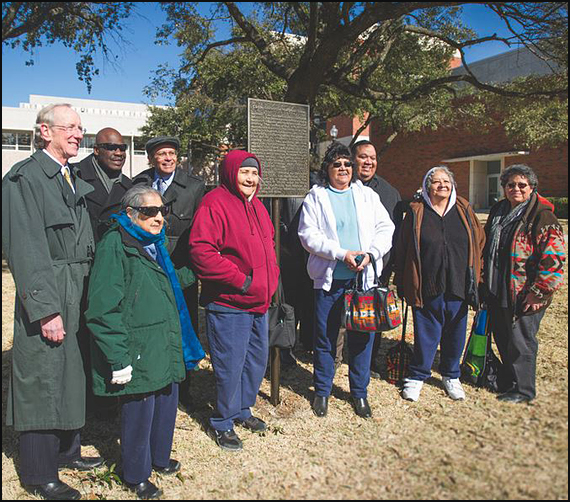 “It’s an honor for the university to be involved and now a part of that tradition and heritage,” said Jones. “We’re very interested in working with the Caddo Nation and helping them achieve their goals with higher education.”

About The Texas A&M University System: The A&M System is one of the largest systems of higher education in the nation, with a budget of $3.3 billion. Through a statewide network of 11 universities, seven state agencies and a comprehensive health science center, the A&M System educates more than 120,000 students and makes more than 22 million additional educational contacts through service and outreach programs each year. Externally funded research expenditures exceed $730 million and help drive the state’s economy.