It was Dancing with the Stars meets Dukes of Hazzard meets Karaoke at The Landing in Rockwall! Earlier this month Rockwall karaoke enthusiasts were having a few drinks, singing, and cheering on friends as they performed some good (and not so good) karaoke, when suddenly a familiar face took the spotlight. As cell phones captured the moment with photos and videos, someone called out “Bo Duke from Dukes of Hazzard!”

After hearing about the surprise appearance of John Schneider in Rockwall we, along with many others on social media, were curious to know why he was in town, and at The Landing for karaoke night. We were able to ask John in a phone interview from Los Angeles just after a 5-hour dance rehearsal session for his upcoming appearance in Dancing with the Stars.

John is kept busy these days promoting his new album–The Odyssey, performing at concerts and appearing on ABC’s Dancing with the Stars. His recent trip in Texas was to visit friends and perform at Cowboys Nightclub in Tyler, where he filmed his movie “Collier and Company” in 2006. When John is away from Los Angeles, DWTS seeks out locations for dance partner Emma Slater and John to rehearse. The ballroom at The Landing on Lake Ray Hubbard was found by network scouts and was chosen as their rehearsal locale during John’s visit to Dallas and Tyler. 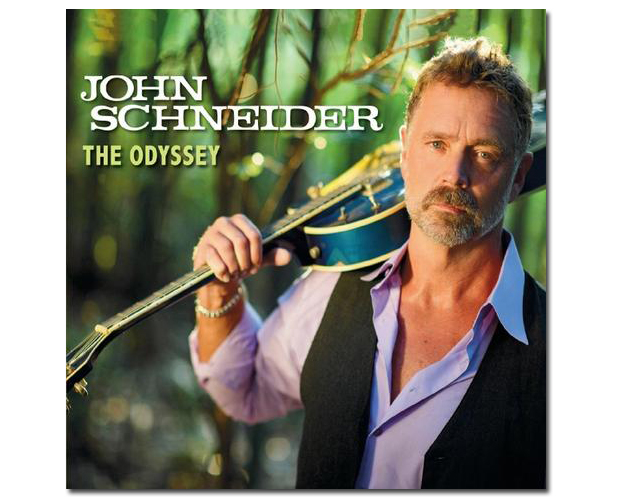 When asked if this was his first time in Rockwall, John said it was, and he was amazed at how beautiful it is here. He was impressed with the ballroom overlooking the lake, and added that the people he met were so gracious. He stated, “Rockwall is fantastic. I met a great caliber of people and enjoyed it.” John enjoyed the friendly welcome he received, and said the first person he met in the lounge at The Landing was “Cowboy Mike.” John said, “Mike was there with his two beautiful grand-daughters and was the first to congratulate me on my recent DWTS performance.” 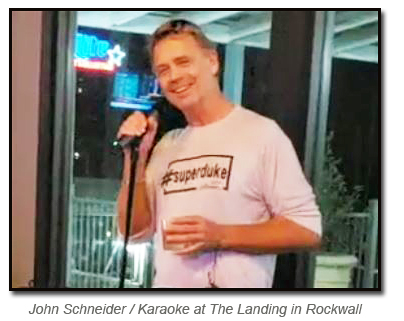 Of course we had to ask—”How did you end up in the lounge singing karaoke?” John laughed and said he had just finished a 4-hour dance rehearsal and wanted to go to the bar for his favorite drink, an Old Fashioned (with Buffalo Trace Bourbon). Unknown to him at the time, his friend Alicia had arranged for him to sing one of his old classics “A Memory Like You.” Though it was unexpected and not the song he would have chosen, John performed for the crowd while sipping his Old Fashioned. A song he personally would prefer for karaoke? –A classic from Blood, Sweat & Tears.

During the September 24 premiere of DWTS, John and Emma did a fox trot to the theme from Dukes of Hazzard (Good Ol’ Boys). On stage was an orange ‘70 Dodge Charger. John was surprised the studio located a car to represent the infamous General Lee, the 1969 Dodge Charger driven in the television series. He enjoyed the opportunity to slide across the hood of the car during his dance, and chuckled as he stated it was something he did many times during his days as Bo Duke. The series ran from 1979 to 1985.

As the oldest contestant on DWTS, 58-year-old John says the rehearsals and performances are tough on him. Since starting the program, he has lost 20 pounds, and feels good about getting back in shape. He also enjoys the camaraderie of the contestants, and performing on the show. John believes his recent recording project “The Odyssey” is what brought him back into entertainment headlines, and is what prompted the producers of the show to contact him for this season of DWTS. 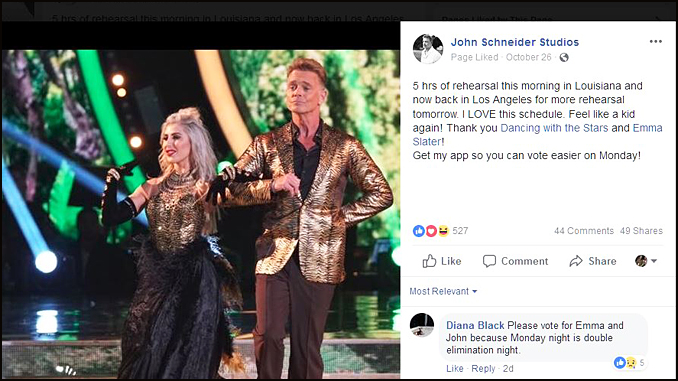 Be sure to catch the performances tonight on Dancing With the Stars. In a Facebook post today John tells fans “… We are 2nd up tonight. Get your phones ready! Wait till you see my Halloween Hair!”

To keep up with John’s projects, past and current, fans can download The John Schneider Mobile App
The intro from his App: John Schneider was born April 8, 1960 in Mount Kisco, New York. Schneider began acting at the age of eight in local theatre productions. In 1977 he had a small featured role in Smokey and the Bandit, which starred Burt Reynolds.

When he’s not acting, John can be seen with his guitar creating beautiful works of art echoing his roots, in the director’s chair on his independent productions, or across the world on various TV shows.

John is also heavily involved in philanthropic endeavors and is the co-founder of The Children’s Miracle Network Hospitals with Marie Osmond.