Donald Trump, the front runner for the Republican presidential nomination, has a Rockwall connection with insights into the man behind the persona.

The public posturing and antics we see every day on TV lead us to wonder if The Donald is showing his real self on the campaign trail. Is he just playing to the crowd, or does Trump really mean what hes saying? If he makes it all the way, what kind of president would he be? How do we cut through the hype and get a true sense of the man who might be our next leader?

One possible answer is right here in our own back yard. Rockwall business owner Gene Folkes had a chance to spend quality time with Mr. Trump in 2010 as a contestant on reality game show “The Apprentice.” For a month straight, contestants met with Trump in the board room and in one-on-one meetings to discuss assigned tasks, receive business advice or, famously, to get fired. Each meeting was a unique opportunity to get behind the curtain, so to speak, and get a closer look at the reality behind the myth.

No one who has seen “The Apprentice” can escape the fact that it is Donald’s show. He controls everything about the process. From the layout of the board room set even down to what the contestants wear, he is in charge. As Folkes shared, there are even strict guidelines on how to interact with Trump on camera. There is no room for back talk. You either agree with him or you’re edited out, and eventually fired. According to Folkes, “It became apparent early on in the production of the show that it was less about business and more about showmanship.”

During one filming session with Trump’s son Donald Jr. at his side in the board room, the younger Trump answered a question from his dad with “yeah.” Donald Senior immediately stopped the cameras. He then turned to his son and said, “How many times have I told you, the correct answer is yes, not yeah.”

That’s not to say that being an offspring of the Donald is difficult. The New York billionaire is very demanding of his kids, yet respects their opinions on nearly everything. Trump relies on them for their feedback and advice, perhaps more so than the advisors he has on staff. Daughter Ivanka, especially, has the most influence on him, and Gene noted that Trump seemed to pay more attention to Ivanka’s ideas and opinions over the input from her other siblings.

Mr. Trump does not drink or smoke, and supposedly never has. He can be quite judgmental of those who do, and sees it as somewhat of a character flaw. “The Apprentice” viewers who follow the show might remember Khloé Kardashian’s appearance on the celebrity version. It came out in a board room meeting that Kardashian had been arrested several years before for driving under the influence of alcohol. He fired her on the spot.

Trump has made it clear in public that he does not care much for politically correct speech. Nowhere was this more evident than on the show when off camera. He would often ask the men if they found the women attractive. One day, he shut down the shooting schedule and announced that it was time to “sex things up.” The men needed sharper suits and the women needed shorter skirts. So he took the entire cast out for an all-day shopping spree. When they got back to the boardroom Trump asked the men how the ladies looked. He would ask them to stand up and turn around, and ask the men, “What do you think?” Then he’d ask the ladies what they think of the men, then stating, “I think they look OK but I don’t swing that way.”

Folkes said that in retrospect being part of the show gave him some interesting views on how Mr. Trump might be as the president of the country. “He has extreme control issues. Everything shown on camera is personally screened beforehand. Nothing is shown that he doesn’t want to be seen.” Also, Trump is quite a germophobe, and constantly washes his hands. As a result, hes not a very touchy-feely person. He doesn’t sleep much, and has lot of energy. He works out for hours a day in his own gym and is fanatical about golf.

Where he might struggle in office: “He won’t be able to just bark orders and get his way. He won’t just be able to fire anyone who gets in his way, like he can in his companies. He will have a challenge with congress. He is not a unifier. Government processes can be much more complex than business deals.” Folkes added, “The way he sees it is the way it is, whether true or not. There is no room for back talk.”

His ego is huge, and probably won’t let him give in too much to foreign interests. He has to win, and diplomacy may suffer for it. He has already gotten sideways with Mexico (rapists, murderers and a big beautiful wall) and with Britain (Parliament talks about banning him from the country) in a few short months into his campaign. “I don’t see us getting far in negotiations with the Middle East with him in charge.”

That’s not to say that he does not know how to manipulate the political system, which he has shown over and over again in his real estate dealings. How that might translate into doing the peoples’ work as opposed to furthering his own interest remains an open question. He can relate to the common man, but in the end we are all “they.” If you are not in his social or economic class, there is a certain insensitivity there.

Folkes stated, “Trump will want America to win by any means possible. He is a sore loser. His ego will not allow him to have a bad presidency, at least in his own mind. He is very pro-military and stated several times that we need another General Patton or MacArthur.”

Is Trump sincere or playing to the crowd? “Both, I think,” said Folkes. “He sees the world in very black or white terms. It’s either his way or it’s wrong. We could end up winning by showing strength, or push things too far and become isolated from the rest of the world. Scary thing is, he seems to be OK with either outcome. I get the sense that when he talks about making America great again he really means pushing us back to the 1950s.”

So, would he be a good president? According to Folkes, “One thing he made clear more than once is that he has wanted the job since the 1980s. And that he is an admirer of Vladimir Putin, saying that there’s a man who knows how to get a job done.” 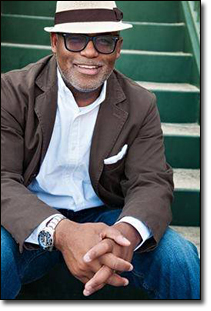 Gene Folkes appeared in Season 10 of “The Apprentice,” and was fired in the fifth episode on Oct. 14, 2010. He has a Bachelor of Science degree in business from Morris Brown College and served in the U.S. Air Force. He previously worked at several high-profile financial companies as a financial adviser. Folkes owns Right at Home, a senior care business located in Rockwall, Texas.