Something strange is definitely happening on Skid Row. People are mysteriously disappearing and a weird plant is growing unnaturally fast at Mushniks Flower Shop. Coincidence? Audiences have a chance to find out at Mesquite Community Theatres performance of “Little Shop of Horrors,” playing weekends through March 5.

Based on the 1962 horror/comedy film by Roger Corman, this musical is loaded with acting, singing and dancing talent from all over the area, including veterans of Rockwall theatre and musical productions:

Patrick Persons has been seen in a number of Rockwall Summer Musical productions, including Guys and Dolls and Carousel. He portrays Mr. Mushnik, the flower shop owner who knows an opportunity when he sees one. 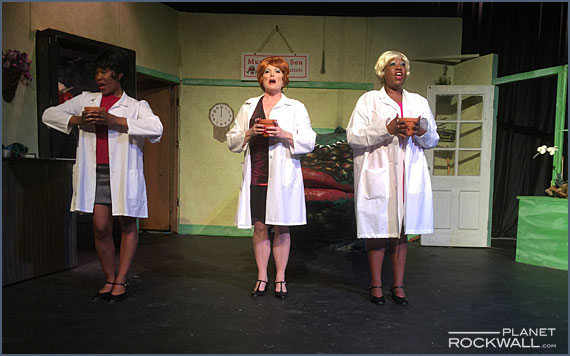 Judy Perser, as Ronnette, has been in more local theatrical productions than we can count. Her standout performance as “The Drowsy Chaperone” at the Rockwall Community Playhouse last season was a huge hit.

Director Dennis Gullion also does double duty as the dastardly Orin Scerivello, the sadistic dentist you love to hate. His credits are numerous, including many Rockwall and Mesquite productions.

Al Wall plays several roles in this performance. He is also active in the local theatre scene, serving as Guild president at Rockwall Summer Musicals as well as a variety of characters in Rockwall and Mesquite productions.

Seymour, the hapless flower shop employee with a green thumb, at least when it comes to a certain carnivorous botanical, is deftly portrayed by Joseph Burnam. Joseph has many local theatre credits to his name and works as a private voice teacher.

Some may wonder whether a horror movie about a bloodthirsty alien plant could translate to a funny and entertaining musical. The answer in this case is a resounding yes. Under the musical direction of Cody Dry and choreography of Christian ONeil Houston, the action comes at a quick pace. The tunes are catchy and the dialogue moves along with just the slightest hint of risque, making it appropriate for families and their older kids. Even if none of that is of interest, come if only to see the plant as it grows from a small pot to a giant animated botanical monster.

Tickets are available at the Mesquite Community Theatre website , or by calling 972-216-8126.