In their first foray into off-site adoptions, local animal welfare group Rockwall PAWS scored a double victory at the Royse City FunFest on Saturday. The organization made arrangements with the Royse City Animal Shelter to bring a couple of their canine residents to the PAWS booth at the festival and introduce them to the crowd. By the end of the day, “Doogie,” a black and brown Dachshund, found a new mom, and a Miniature Schnauzer mix puppy was brought home the next day by someone who had seen him at the event.

Volunteers walked the dogs around FunFest throughout the afternoon to gain maximum exposure, and had periodic announcements made to declare their availability for adoption. In the process, they got plenty of attention from kids and adults alike, ultimately resulting in permanent homes.

PAWS volunteers were very pleased to see the well-mannered and very social Dachshund find his new family. The young dog had been found as a stray, obviously well-cared for, but no one claimed him during the three weeks he was at the shelter. A volunteer stated, “He was definitely overdue for companionship and a comfy bed to sleep on.” 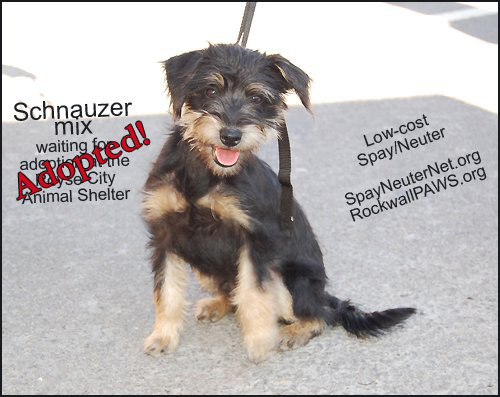 Rockwall PAWS (Pets Assistance and Wellness Support) is a volunteer organization dedicated to finding homes for adoptable pets in the area. They work to spread the word about pets at local shelters and rescue groups, and help to fund spay and neuter programs and treatment for pets considered unadoptable because of heartworm or other treatable conditions. The group has been successful in getting a number of heartworm-positive dogs at the Rockwall Adoption Center adopted out and treated by local veterinarians. Without treatment, heartworm is always fatal, and these animals faced a bleak future without assistance from PAWS.

For more information about PAWS and how you can help call 972-310-1354,
or visit their website at www.rockwallpaws.org.