Composers have always taken inspiration from nature, so it is no surprise that many have picked up their pens to give us musical depictions of the fascinating creatures with whom we share the planet. Throughout the 2016-17 Season, the talented musicians of the Garland Symphony Orchestra will offer our audience the most delightful and entertaining of these philharmonic fauna, from the smallest (Shostakovich’s gadfly) to the largest (Saint-Saëns’ elephants). Our musical zoo will include bears (Haydn and Bartok), horses (Auber), penguins (Scott), and even a cow (Milhaud). A few mythical animals will come to musical life as well, including Stravinsky’s “Firebird” and Debussy’s “Faun”. It’s a symphonic safari not to be missed!

The concert will feature violinist, Kiarra Saito-Beckman performing Tchaikovsky’s “Violin Concerto in D Major.” Kiarra Saito-Beckman, 17, is a violinist from Bend, Oregon. She is currently a sophomore at the Cleveland Institute of Music where she studies with the world-renowned pedagogue Jaime Laredo and former associate concertmaster of the Dallas Symphony Orchestra, Jan Mark Sloman. Kiarra has won numerous awards and competitions. In May of 2016 she was a semi-finalist in the Stulberg International String Competition. She placed first in the 2015 National Music Teachers National Association (MTNA) Senior Strings Competition, held in Las Vegas, Nevada. In 2014, Kiarra was named the PepsiCo National Young Artist of the Year as the first-prize winner of the Charleston Symphony Orchestra’s National Young Artist Competition in South Carolina. Also in 2014, Kiarra placed second in the ENKOR International Violin and Piano Competition, as well as second in the Young Artist National Competition held by the Coeur d’Alene Symphony Orchestra. She competed as a finalist in the 2014 MTNA National Solo Competition in Chicago, Illinois as the winner of the MTNA Northwest Regional Competition and Oregon State Competition.

In the fall of 2014, Kiarra was invited to Washington DC to perform Franz Waxmans “Carmen” Fantasy on the National Public Radio program, “From the Top,” which features the countrys finest young classical musicians. She has also been a featured performer on the Oregon Public Broadcasting radio program, “State of Wonder,” as well as the Portland, Oregon-based station, All Classical, and most recently, “TedxBend”.

As a violinist, Kiarra has been awarded many scholarships. She is a recipient of the Jack Kent Cooke Young Artist Award, and a seven-time recipient of the Young Artist Scholarship provided by the Sunriver Music Festival. She has attended the Meadowmount School of Music in Westport, New York for the past six summers and the National Arts Centre Young Artist Program in Ottawa, Canada in the summer of 2016. She has performed in solo master classes with Cho-Liang Lin, Joseph Silverstein, Jennifer Koh and Tong Wei-Dong, as well as in chamber music master classes with Lawrence Dutton, Eric Larsen, Patricia McCarty, and Steven Rochen. 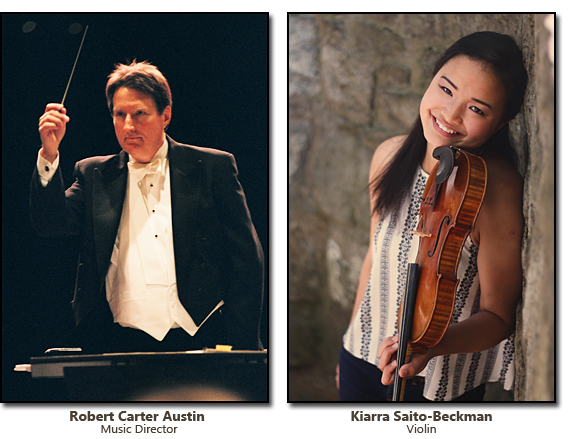