This larger-than-life, faithful reproduction of the Frank Reaugh painting “The Approaching Herd” is the latest mural to adorn the vintage buildings in Historic Downtown Terrell. The mural is located at 227 N. Adelaide, and was painted by Texas artist Charlie Bullock. Reaugh used his sketches from Terrell and West Texas for the composition. The artist wrote, “These Longhorn Texas cattle depicted were beautiful animals but were very wild. Many of them had never seen a man on foot before. People walking were sometimes treed by them. It would have happened oftener if there had been more trees.” – Frank Reaugh, “Paintings of the Southwest”, 1937.

Charles Franklin Reaugh, born December 29, 1860, moved with his family to Terrell in 1876. He taught art in Terrell, then in 1890, he and his parents moved to Dallas where he established his “Ironsides” studio, but continued to visit Terrell until his death in 1945 at the age of 84. He is buried with his family at Oakland Memorial Cemetery in Terrell. Reaugh traveled the West, capturing scenes to be used in his realistic but poetic images of the vistas, Longhorn herds, and the cowboy life that was Texas. He concentrated on small pastel sketches of the wild and colorful Texas Longhorn. Reaugh once said “no animal on earth has the beauty of the Texas steer.” He studied art at the School of Fine Arts in St. Louis, and at the Academie Julian in Paris, France. His paintings are displayed at the Harry Ransom Center at The University of Texas at Austin, Panhandle-Plains Historical Museum in Canyon, Southwest Collection Library at Texas Tech University in Lubbock and the Texas Capitol Historical Art Collection in Austin.

“The City of Terrell is excited to embark on this creative initiative because it shows our commitment to retaining the charm of yesteryear while enhancing commercial activity in Historic Downtown Terrell today. November 17, 2018 is hereby proclaimed “‘Approaching Herd’ Mural Day.” ~D.J. Ory, Mayor

The “Approaching Herd” Mural Day dedication, ribbon cutting, and screening of the documentary “Frank Reaugh: Pastel Poet of the Texas Plains” in Council Chambers will commence on the west side of Terrell City Hall at 227 N. Adelaide from 3:00 to 5:00 PM, Saturday, November 17, 2018. This event is free of charge and open to the public.

Visitors may want to make a day of it and view all ten exterior wall murals of the Terrell Mural Project. The murals are an on-going endeavor to portray the history of Terrell through art. You’ll find nine murals throughout Historic Downtown Terrell and one at the No. 1 British Flying Museum. They are: “Colonel Green and his 1899 Automobile”, “Movie Posters”, “Lyric Theatre in 1948”, “The Circus Comes To Terrell”, “Stearman Kaydet PT 17 Biplane”, “Governor Oscar B. Colquitt”, “Texas Flag”, “Terrell Volunteer Fire Department” and “No.1 British Flying Training School”. Visit www.muralsofterrelltx.com for more information and mural locations. 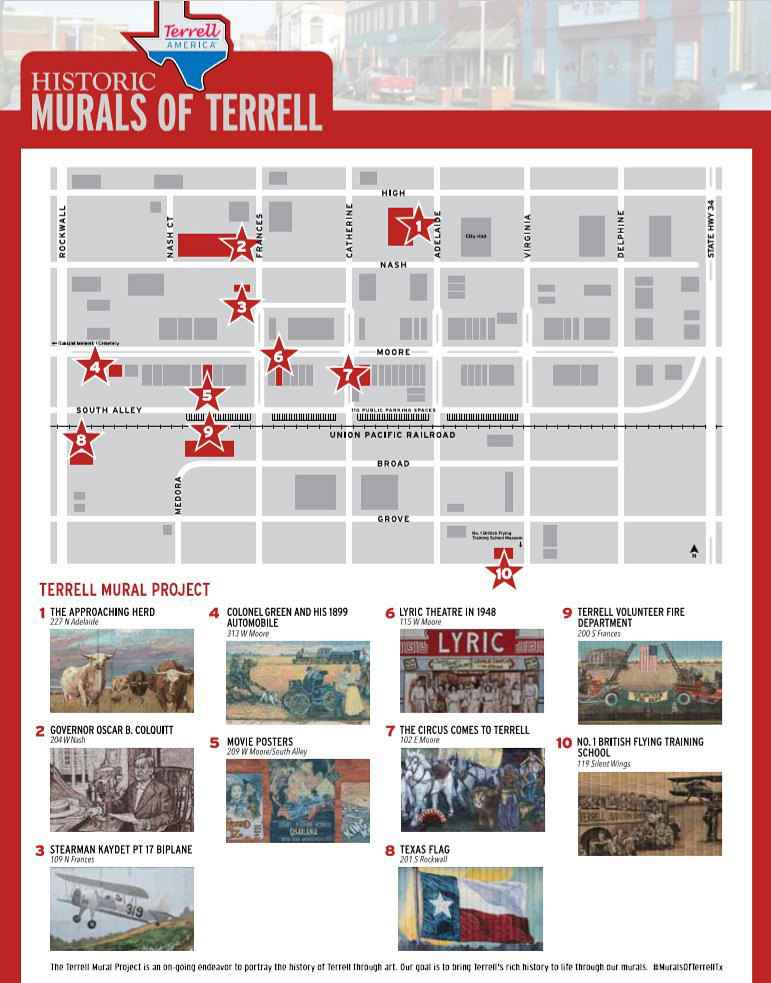