It always starts with a question. Which leads to another question. And then another. Before you know it, the balance sheet of questions versus answers is heavily weighted in favor of the former.

Take the case of the Rock Wall. The first question usually asked is, “Where is it?” The short answer is, “buried under the ground.” Well, we all know where short answers take us. No place satisfying, that’s for sure.

A lot has been written about our famous wall, much of it in the pages of this website (see links below). Natural or man made? If built, by whom? How, when and why did it get buried? Efforts to answer these questions have been conspicuously lackluster to date. The latest excavation performed a few years ago was covered back up within days, leaving just enough time for geologists to drill a few holes in one of the blocks to be shipped off for study. The result? A stony-faced proclamation by the experts that the wall is definitely a natural phenomenon. Case closed, right? No more questions, please.

Questions, it turns out, are pesky little devils. They don’t go away easily, and tend to proliferate if left unattended. What about artifacts found buried near and embedded in the wall, some older than 4000 years? Shellfish have been found buried near the site with the meat still intact, hundreds of miles from the nearest seashore. What’s up with that? Soil samples from the Rockwall area show that, instead of being laid down in sedimentary layers over time, the earth shows signs of being churned and mixed up to a depth of 30 feet or more. Questions and more questions. 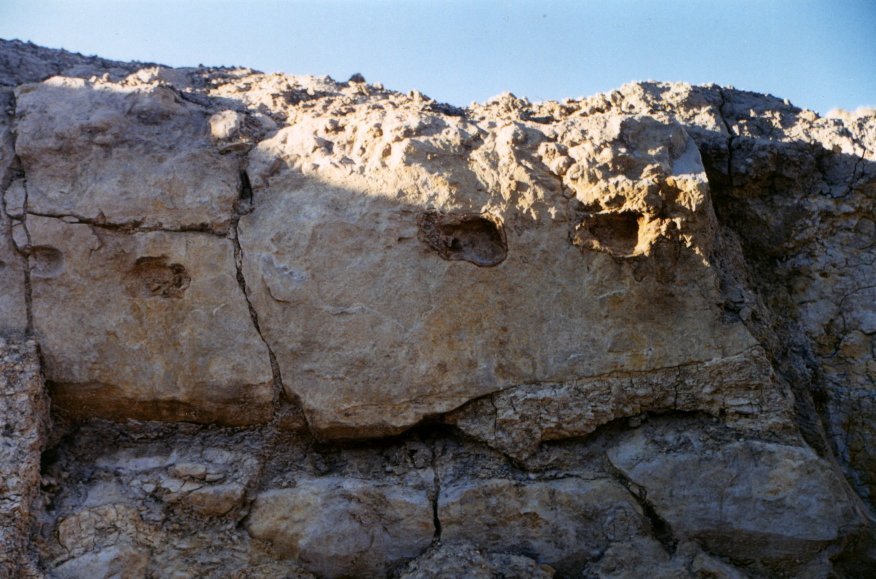 Metal rings found embedded in the wall – are these natural?

All of this brings us back to the question of how the wall got buried. Some geologists say it was always buried. The sandstone that comprises it just forced its way up from below and formed itself into chunks that look exactly like building blocks, complete with mortar, windows and embedded metal rings. Fine, but that does not explain away the other questions. What about the artifacts? The shellfish? The mixed up soil?

One idea, supported by recently discovered scientific evidence, has to do with perhaps the greatest influence on our life here in Texas: the Gulf of Mexico. For over 624 miles, this great body of water defines our weather, our economy, our history. It’s over 12,000 feet deep in spots, and for thousands of square miles off the coast features a wide and relatively shallow continental shelf. The temperature of the gulf averages around high 60’s in January and as high as the low 90’s in July and August, making it a warmer than average body of water.

Recently it has become generally accepted and borne out by geological evidence that sometime around 65 million years ago, an asteroid between 7 and 8 miles wide impacted the Gulf near its southern edge off the Yucatan peninsula. The explosion, described as making a nuclear bomb look like a firecracker, and subsequent fires, smoke and dust culminated in the extinction of about 75 percent of all life on the planet, including the dinosaurs.

More relevant to our story, however, is the big hole it left. Nearly 125 miles across, the crater created steep cliffs some 4,000 meters high buried under the waters off the coast of the Yucatan, facing the southern coast of Texas. Over time, sections of this cliff, known as the Campeche Escarpment, have sloughed off, helped by events such as earthquakes and undersea currents. Under the right conditions, these underwater avalanches can produce enough turbulance to create a tsunami. According to the U.S. Geological Survey, “Giant landslides have the potential of generating large tsunami waves at close and also very great distances and would have the potential to devastate large areas of coastal land.” Such a landslide followed an Alaska earthquake in 1958 that produced a wave that ran up over 1,500 feet on the opposite shore of Lituya Bay and sank several fishing boats. 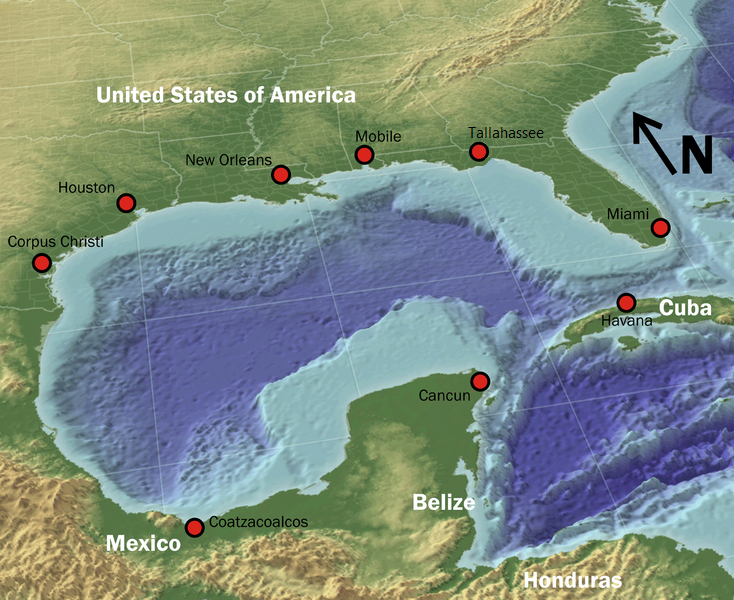 The Campeche Escarpment, northwest of the Yucatan Peninsula, directly faces the Texas coast.

At around 300 miles from the Gulf shore, it is hard to fathom that the Rockwall area could be threatened by a tsunami. Then again, any wave powerful enough to climb up a 1,500 foot cliff should have no problem reaching an area that sits a mere 500 feet, give or take, above sea level. Well, as evidence uncovered by recent discoveries indicates, that is exactly what happened, and it happened roughly 4,000 years ago. We’ve seen the footage of the devastating 2011 tsunami that occurred near Fukushima, Japan and the megatons of debris it left behind. Now imagine a force ten times greater, as indicated by geologic records, sweeping over North Texas.

Now we are left with more questions than we started with. What could have triggered an underwater landslide that would create a wave big enough to inundate an area so far from the coast? There is evidence of people living here at the time. Who were they? Did they have anything to do with building the wall? Were they buried along with it?

We will explore these questions and more in future articles. Much research has been done lately which has produced some surprising answers. And, of course, more questions.