Tom Biscardi is what you could call a driven man. Most of his adult life has been spent in a single pursuit – to prove that the creature known variously as Bigfoot, Sasquatch, or Yeti actually exists and continues to be spotted all over the world. To this end, he and his team of “Bigfoot Hunters” will respond at a moments notice to any report of a sighting they deem credible. And so it seemed inevitable that Rockwall, home of the buried formation that many still believe to be an artifact of an ancient and mysterious civilization, would be the locale for the latest episode in the ongoing search for the elusive creature.

Last week, Biscardi and his crew arrived in Rockwall after receiving a call from a local retired police officer. The gentleman claimed to have seen three hairy creatures, one very tall with two possible juveniles in tow, on some wooded land north of Lake Ray Hubbard. The evidence he presented was enough to convince the team to drive out from California to investigate.

We learned of this visit when a blogger with the Dallas Observer used our downtown Rockwall photo (and added a “creative touch”) to headline their story: 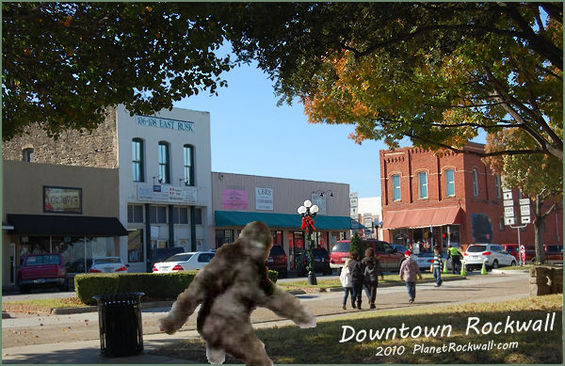 Equipped with infrared cameras, traps and bait, the Bigfoot hunters camped out on the land near Lake Lavon and began their vigil. They baited three areas high up on trees, set out the traps and waited. During the night several wild hogs were spotted, but little else. Checking the cameras yielded nothing useful, but the bait on two of the trees had been taken and the area was pretty well trampled. “The way we set the bait, only something very tall with gripping hands could have gotten to it,” Biscardi said.

The next afternoon as they were preparing for their second night at the site, Biscardi and his team were met by local sheriff deputies responding to a report of trespassers on his land. “Mind you, we had permission from the landowner to be there, but the complaint came from the person leasing the land, who actually lived there.” This, the deputies determined, was cause enough to ask the team to leave.

We met with the Bigfoot hunters at the Best Western Inn & Suites in Rockwall. During our interview Tom shared casts of prints taken at Camp Maxey, Texas, during a previous investigation in 2006:

Known as one of the worlds preeminent trackers of the legendary hominid-like creature, the existence of which is largely discounted by most scientists, Tom Biscardi is a true believer. On seeing a television interview in 1967 with Roger Patterson, who filmed the now-famous footage of a Bigfoot crossing a river in Northern California, Tom became fascinated by the stories. “If we can put a man on the moon,” he asked himself, “why cant we find this creature?” Since then, he has come to find out just how hard that can be. Despite having cast over 60 footprints, obtained hair samples, and submitted DNA and photographs for analysis, he and his team have yet to come up with the “smoking gun” that will put all doubts to rest.

We had hoped our short visit with Tom would reveal that Rockwall would be the place where the final truth was brought to life. Alas, it was not to be, as the Bigfoot Hunters have headed home pretty much empty handed. But Rockwallians can still hold our collective heads high knowing that as the potential home of prehistoric giants and walls built by forgotten cultures, and now a tribe of Texas Sasquatch, there is nothing ordinary about our neck of the woods. 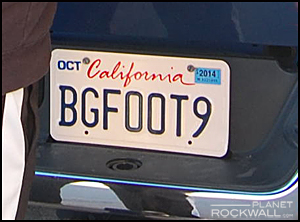