While at the Harbor on a sunny Saturday morning, cast your gaze northward toward the grassy field behind the Eclipse
health club. You are likely to spy people doing some strange-looking
things in the name of fitness – yoga, tai chi, various aerobic routines
– but none stranger than aficionados of the kettlebell. Lifting,
swinging, and squatting with heavy cast iron balls, they could easily be
mistaken for an advancing army of crazed warriors.

Basically a cannonball with a handle attached, the kettlebell was
virtually unheard of in North America until a few years ago. Used in
Russia for over 200 years by elite army units, kettlebells gained
popularity here largely through the work of Pavel Tsatsouline (Dont
bother trying to pronounce it. Its Russian. Enthusiasts just call him
Pavel.), a former physical trainer for the Soviet Special Forces. In
1998, an article Pavel published about the kettlebell was picked up by
Dragon Door, an American publisher of fitness and martial arts books.
Popularity quickly grew and in 2001, Dragon Door forged the first
American made Russian-style kettlebell. 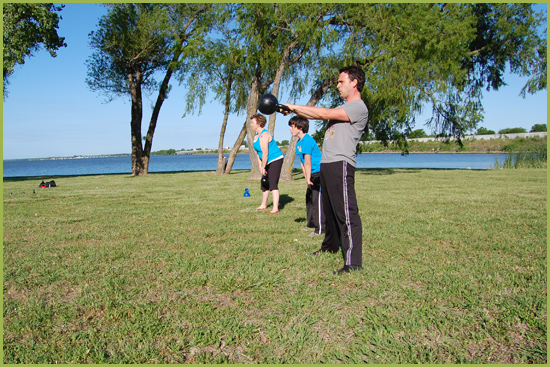 Since then, kettlebells have found their way into schools, gyms and
firehouses all over the country. Pavel has consulted with military and
law enforcement agencies worldwide to incorporate the kettlebell into
their training programs. Instructors in every style of martial arts are
including them in their routines. So why are so many flocking to this
new sport? Is it just the latest in a long string of health-club fads?

Not so, says Paul Britt, local fitness coach. “The kettlebell is all
about proper movement as well as working large muscle groups all at
once. The point is not to work yourself to exhaustion, but to train your
body to move properly while gaining strength. Bottom line is, once you
learn to move better, you begin to feel better.”

The basic movement, and the one Paul starts his students with, is the
swing. Using a loose grip, the kettlebell is held between the legs, then
propelled forward using the hips and back and allowed to return to
starting position. Done properly, this exercise safely works nearly every
muscle group in the body, and with an economy of motion that even
the most time-crunched urban professional can appreciate. A complete
kettlebell workout can be a short 20-minute a day routine.

Paul is certified by Pavels organization, the Russian Kettlebell
Challenge, an accomplishment one does not obtain easily. A rigorous
program and high failure rate insures that only the best become RKC
certified. Students come from all over the Metroplex to train with Paul.
One drives to Rockwall from Flower Mound. “We have
trainers closer to home, but its worth the drive to work with somebody
of Pauls caliber.”

Anyone interested in learning more about the kettlebell can see it in
action at his center at 207 County Line Road, Rockwall. Call 972-836-9265. Also visit Paul Britts blog. 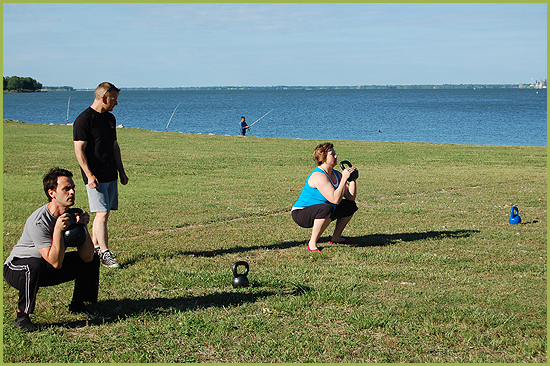