James Michael Williams, a music graduate from A&M Commerce, finds himself as much at home in his private teaching studio in Rockwall as he does on the international concert stage in Europe. Returning from his latest international festival in Spain, Mr. Williams continues to impart his passion for music to his private students while finding opportunities to share his talent through local concerts. His next concert will be Sunday afternoon, November 9 at 3:00. The concert venue will be at the First Presbyterian Church, 602 White Hills Dr., Rockwall, and is free to the public.

Mr. Williams gives his mother credit for identifying his prodigy-like gift of music when he was but four years old. He found that he excelled at sports much like he excelled at music. ‘I tried quitting music numerous times as a youth’, said James. ‘In retrospect I realize that music really helped my learning processes as the discipline of practicing the piano was applied to other areas of my life’, said Williams. 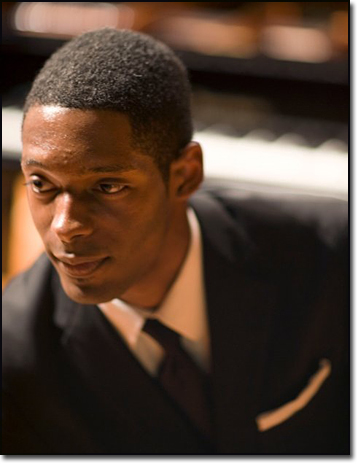 When asked what advice Mr. Williams would give students and parents who are passionate about music, he replied by stating, ‘I was blessed because my parents refused to allow me the opportunity to quit at anything. My parents didn’t support failure. They were not mean about it, however, they were unwavering in their conviction that I learn meaning of commitment. In the midst of difficulty was no time to consider giving up. Their philosophy was this… I had a gift, and I would develop that gift until I became an adult. Then I was free to make a decision about whether or not it was something I wanted to pursue as a career. Had I been allowed to quit when the journey became hard, I would have lost my only chance to do what I truly loved ’.

Both James Williams and Hubert Pralitz are part of the teaching faculty at the Rockwall School of Music. To learn more about them and their teaching availability visit www.RockwallMusic.com .

How did you get your start in piano?

My mother got me started in piano at a very early age, four years old.

How did you find music to be compatible with the other things that you had an interest in pursuing as a child/teen?

As a child music was not my favorite thing to do because none of the other boys at my school participated in music lessons they were all about sports.

I tried quitting numerous times as a youth. I would rarely practice in those first few years unless my mother made me or if there was a recital or some other serious performance pending. In retrospect I realize that music really helped my learning processes as the discipline of practicing was applied to other areas of life. Like sports for instance, I was involved in several different sports as a youth and found some level of success in each one because I had learned the value of approaching sports through the discipline that you cannot help but be exposed to while learning music.

For parents who have noticed a natural desire for music in their child, what advice/encouragement would you give them based on what you learned from the way your parents encouraged you?

If your child displays talent for music the best advice that I can share is the fact that “aptitude/talent” for anything is useless unless it is molded and disciplined through rigorous training and consistent practice.

Was there ever a time when you wanted to give up on your musical dreams and pursue a different path for your life? If so, what caused you to return to your love of music or to stay on that path even when you considered stopping?

I was blessed because my parents refused to allow me the opportunity to quit at anything. The going was rough in both music and sports, I was blessed with wonderful coaches who pushed me and demanded that I learn. Many times I did not want to do what they asked of me particularly with my music teacher, but my parents didn’t support failure. They were not mean about it just firm. I had a gift, and I would develop that gift until I became an adult. Then I could make a decision about whether or not it was something I wanted to do with the rest of my life.

Music was way harder than any other thing that I did, and in the end that is the reason why I stuck with it.

For parents who currently have children enrolled in music lessons, what advice would you share about making the most out of their practice time in between lessons?

Consistency. Being consistent every day is the best gift you can give any form of discipline be it sports, music or whatever you might be interested in.

Tell me about the concert on Sunday afternoon, November 9th:

What you hope to accomplish through this concert:

Classical music is a journey, a concert is an invitation to the journey as it has been taken by the performer. In some cases for us as performers a performance is the completion of the personal journey we undertook in the learning of these pieces. There is no perfect performance much similar to life. We are not perfect and every situation is not perfect, but we live for those brief moments when everything makes sense. If the audience leaves having experienced just one such moment then we have had a successful journey together.

Any final thoughts/encouragement for people who have a deep love of music?

For anyone who is learning to play an instrument, especially if you are discouraged, I almost gave up many times. Both as a youth and as an adult, however, I cannot imagine my life in this moment being any different. Piano has always been my first love. Music is my passion. Had I been allowed to quit when the journey became hard, I would have lost my only chance to do what I truly loved.

Parents, whether music or sports are things your child is prone to, embrace the structure and discipline that these mediums provide. Realize your child will probably hate it more times than they will love it, particularly if they are learning at a rate that matches their propensity, but that growth will give them a unique identity that they would never regret it as an adult.

James Williams is a music graduate from Texas A&M Commerce and recently returned from participating in an international music festival in Spain. For the past four years he has been part of the piano faculty of the Rockwall School of Music, 749 Justin Rd, Rockwall.