When Taz, a young chocolate lab, arrived at the Rockwall Animal Adoption Center in January, 2010, it seemed that he was doomed from day one. Although he was evaluated and deemed adoptable by shelter staff, he had one fatal flaw – he tested positive for heartworm. While the disease is treatable, the process can be expensive and requires the dog to be kept in quiet conditions for as long as a month or more. Left untreated, heartworm is invariably fatal. Since the shelter didnt have the resources to care for these cases, their policy was to euthanize the animals. 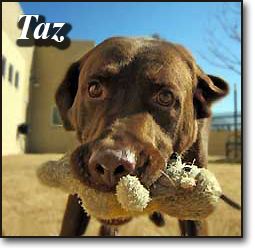 Fortunately for Taz, local animal lover Sandra Solomon had just formed a non-profit organization, Rockwall PAWS, to help out with this type of situation. She contacted shelter management with an offer to sponsor treatment for adoptable heartworm-positive dogs if they would hold them for adoption. Once adopted, the dogs new owner would arrange for treatment and be reimbursed by PAWS. Taz became the first of over 130 dogs saved in this manner since then.

PAWS has not limited its activities to saving heartworm-positive dogs. In October 2010, a young yellow lab was admitted to the shelter. No one wanted to adopt the high energy dog, and it was feared he would become a permanent resident. PAWS arranged to have him evaluated as a potential drug-sniffing dog after a member recognized desirable traits in his behavior for such duties. After a thorough testing process, Hunter was sent to specialized drug detection training. To the surprise of many who worked with him, he showed an incredible aptitude for the work and went on to become the lead dog for K9sniffers, a private canine drug detection service in Milwaukee, Wisconsin. Read Hunters amazing story. 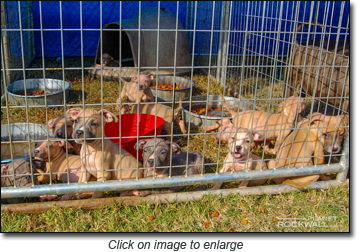 In 2011, PAWS took over the care of 11 pit bull puppies who were seized as part of a raid on an illegal puppy mill. The pups were malnourished and infested with mange. Members arranged for foster care to nurse them back to health, and all have found good homes. The owners of the puppy mill were eventually tried on animal cruelty charges, found guilty and barred from owning dogs. PAWS members attended the two-day trial and provided material which aided the prosecution.

Members participate in local adoption events such as those held every weekend at Petco and PetSmart, along with outreach programs around the area. PAWS also works to promote spay and neuter programs to help reduce overpopulation of unwanted animals. One local organization, the Spay Neuter Network in Crandall, Texas arranges monthly transport of dogs and cats to their low-cost clinic from Rockwall. PAWS members routinely help with these events. Learn more about the Spay Neuter Network and follow the progress of Blue, one of the rescued pit bull pups, as he gets his operation.

PAWS continues to work with Rockwall County heartworm-positive dogs from the Rockwall and Royse City shelters. They are a registered non-profit organization and depend on the generosity of their members and supporters, as well as fund raising activities throughout the year. The next event, the annual PAWS Wine and Dine, is coming up on January 25, 2014 and all are invited to join in supporting and celebrating their work. For tickets or more information call Cathy, 214-532-4407.