There is good news for lovers of orchestral music who might assume that Dallas is the closest place to find a fine classical performance. Just a stone’s throw across Lake Ray Hubbard we are fortunate to have the Granville Arts Center in downtown Garland, home to the 90-plus member Garland Symphony Orchestra. And if their October concert is typical of all GSO performances, we have a true cultural gem here in our own back yard.

Featuring a program of works by American composers, the concert– first in the Symphonic Kaleidoscope series–followed a theme whereby each piece evokes a color. Aaron Copeland’s “Suite from The Red Pony” and “Rhapsody in Blue” by George Gershwin were the better-known examples performed.

One of America’s most prolific composers, Aaron Copeland not only produced classical masterpieces like “Appalachian Spring” and the iconic “Fanfare for the Common Man,” but also wrote popular film scores. One of his best was scored for the movie “The Red Pony” in 1948. Garland Symphony brought each of its six pieces to sparkling life, evoking ranch life in the American West as if it were being projected in Technicolor directly onto the mind’s eye.

A popular and prolific composer of Broadway show tunes in the 20’s and 30’s, George Gershwin loved to experiment with fusing different musical styles. A result of combining classical and jazz elements, “Rhapsody in Blue” became one of his most recognizable works. He originally wrote it for a large jazz band, then re-worked it for symphony orchestra. There was even a part written for banjo, which is not often included in modern performances. GSO happens to have a banjo player on hand, so the audience experienced a rare treat.

Anyone familiar with “Rhapsody in Blue” knows the piece features one of the most ambitious piano solos ever written. Guest pianist Simone Sala was more than up to the challenge, charging into sweeping arpeggios and intricate keying with aplomb, made even more impressive upon learning that he was coming off a week-long bout with a nasty flu virus. A rousing and well-deserved standing ovation ensued.

Continuing the “colors” theme of the evening, the final performance was a rousing orchestral version of “The Orange Blossom Special,” again bringing the audience to their feet. 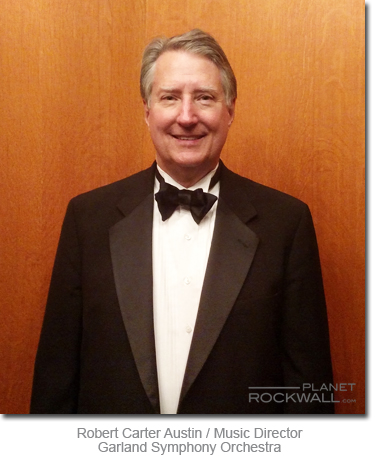 Conductor Robert Carter Austin, GSO Music Director since 1988, not only led his orchestra with feeling and precision, but provided informative and entertaining commentary on each piece, with a perfect dose of humor.

Comprised of professional musicians from over 19 different nations, the Garland Symphony Orchestra was founded in 1978 and has presented over 180 concerts to date. More than 200 composers have been represented, including the premiers of new works by Texas composers. GSO’s ample string section creates a lush wall of sound, equally capable of intertwining seamlessly with solo instrumentation as it is carrying a main theme on its own. The brasses don’t overwhelm, as they often do in some orchestras, and the percussion was just right for the material.

If you’ve never been to a symphony before, the GSO is a perfect place to start. You can leave your black tie at home, dress comfortably, and clap and cheer when the music moves you. There is nothing stuffy about this experience.

The Granville Arts Center is as professional a venue as you’re likely to find in the big city, with plenty of free parking and easy access to DART. Fine dining is abundant within blocks of the Center, so come on over and get your symphony on!

Tickets and more information can be found at The Garland Symphony website.