Broadway In Your Backyard | 10 More Years

In the summer of 2011, local fans of the arts were treated to Rockwall Summer Musicals’ first performance — Rodgers and Hammerstein’s hit musical The Sound of Music. Audience members familiar with Julie Andrews performances of the hit both onstage and in the classic movie approached the Utley Performing Arts Center not knowing what to fully expect. After all, how good could a local production consisting of high school students and various talent from around the Dallas area be?

Well, the answer, it turns out, was very, very good. Under the direction of veteran director Barbara Doudt, Rockwall Summer Musicals has been showcasing local acting, singing and dancing talent every summer since then. Now in their tenth season, RSM aims to do what they’ve done each year — make each show just a little better than the last one. 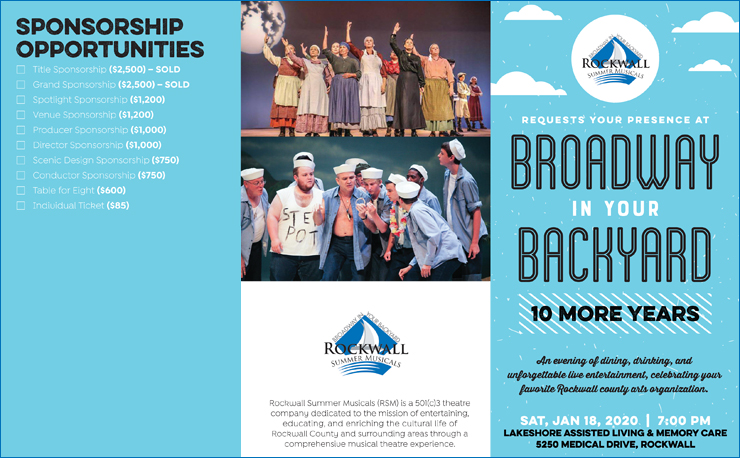 On January 18, RSM is inviting the public to celebrate their milestone anniversary with a banquet featuring entertainment by performers from past shows. Guests will enjoy an evening of dining, drinking, and unforgettable live entertainment, with wine pull and more!

Patrick Persons, RSM Board President: “We’re excited to have such talented performers from our past seasons come and provide musical entertainment for the event.”

Barbara Doudt: “I’m really proud of RSM and all we’ve accomplished over the last nine years. We look forward to continuing for the next decade and beyond!”