While on your commute across the Route 66 Bridge from Rockwall to Rowlett, you may have noticed a man and his flag. You may have also noticed a patriotic display of flags spread out across the bridge on Veterans Day and other patriotic holidays. These are all the acts of Rockwall native U.S. Marine Corps Veteran Sergeant Jeffery Gray.

On a bright and breezy December morning I had the honor of taking my first walk across the bridge with Jeffery. While interviewing Jeffery before we took the trip across the bridge, he shared with me some of his personal quotes which he has tattooed on him. The words “I CAN, I WILL, I MUST” are tattooed on his calf. The words “NEVER QUIT” on his wrist. Jeffery said he never got a tattoo when he was in the military, and he got these because they are words that keep him motivated and dedicated to pushing forward. With his marine gear pack on, his sneakers tied, and his flag securely held, we began the walk across the bridge. 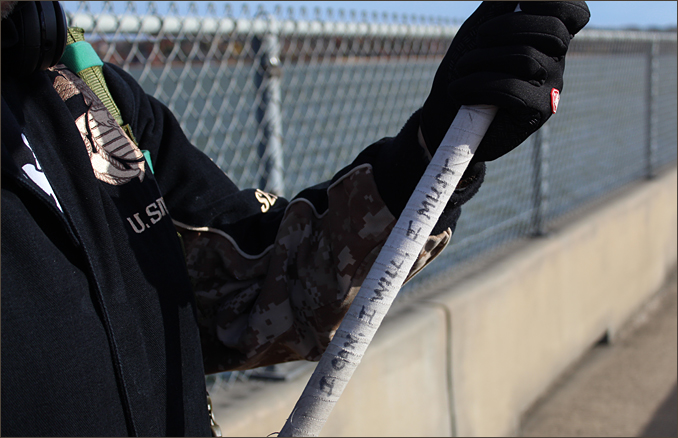 I first discovered Jeffery on the local Facebook page Rockwallian. I noticed what he was doing for the community and read the posts about his “bridge walks.” This was motivation to see the “why” behind the display of patriotism.

Jeffery started his 66 Bridge walks when he was nearly tipping the scale at 400 pounds. After Jeffery was discharged from the military due to a knee injury, he felt he had just given up. He became overweight which is common in Jeffery’s family, and he had lost all hope. A few years ago when Jeffery’s cousin was sick in the hospital, he made a promise to his cousin as he laid on his deathbed, that he would turn his health around and that he wouldn’t end up like him. This was the beginning of his journey.

Jeffery underwent a gastric sleeve surgery and later started walking the 66 Bridge. He said “it was easier to walk than to do any other movement due to knee and ankle surgeries.” Gray still faces the everyday struggle of pain, but says he does it for his “brothers and sisters.” When Gray talks about his brothers and sisters, he is referring to his fellow veterans.

Gray has jumped through some hurdles from the city in regards to his display of flags across the bridge, but has since gained approval after working with the appropriate channels. “With State Representative Cindy Burkett’s help, I was able to get permission.” Gray said. Jeffery obtained permission for a fellow veteran who has been flying his own flag at the end of the bridge as well.

Gray started out walking for himself, he said he now walks to spread awareness about suicide. Every month Gray and local veterans gather together on the bridge and walk to spread suicide awareness for veterans. This month on December 19 at 6:00pm veterans, MAD Radio, 3rd Watch LE/MC, DAV and other organizations will hold their monthly awareness walk across the bridge. 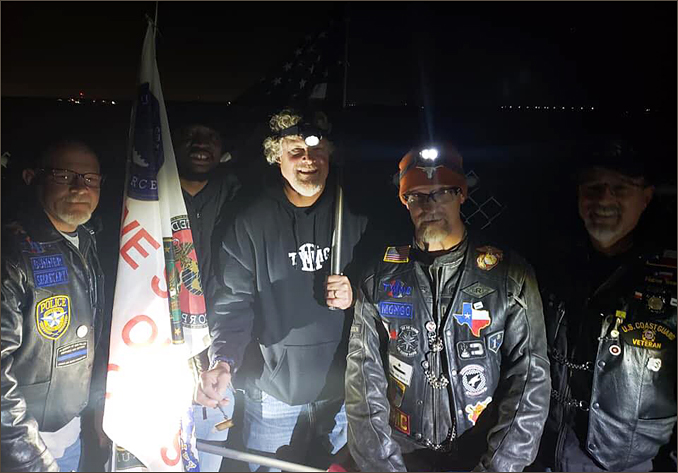 “When we first started out we only had around 10 people show up. Last month we had around 20 people. Hopefully we will have more this month. If by doing this we can save just one life from suicide, it is all worth it.” Gray said.

Gray says that is his “why.” He walks the bridge every day whether it is rain or shine, as long as his body wills him. If all of this can raise awareness, help veterans when they are feeling their lowest, and save a life, he’ll keep doing it. “It brings nothing but exhilaration to know that my work is being seen and awareness is being recognized,” says Gray.

I must say, Gray definitely does get noticed while walking the bridge. While I walked with him that morning, it was nothing short of amazing to me. As passing cars honked and people waved, I felt like I too made a difference. Even though it was very cold and windy, it didn’t bother me, the thrill of walking with a purpose made it all worthwhile.

These actions are worthwhile in bringing suicide awareness to those in need of the information. Every year a reported 6,000 veterans take their own lives. In 2014 it was reported and average of 20 veterans committing suicide every day. In fact, 18% of all American adult suicides that year were committed by veterans, even though veterans made up just 8.5% of the population. Male veterans had a 19% higher risk for suicide compared to the general population while women veterans were 2.5 times as likely to kill themselves compared to the female civilian population, and suicide rates were highest among young veterans aged 18 to 29. Keep in mind these numbers are only the ones that are reported as a suicide.

As a veteran myself, I know we tend to have a certain vision of pride we hold ourselves to. Veterans do not like to ask for help, or show weakness in any form. Getting information out there and asking your fellow veterans or friends how they are doing could likely save a life. If you’re looking to help out or contribute in any way, you can simply share this information and the links listed in this article. Jeffery hopes to get assistance from city leaders to help him and his organizations spread the word on suicides and to bring more attention to the problem. 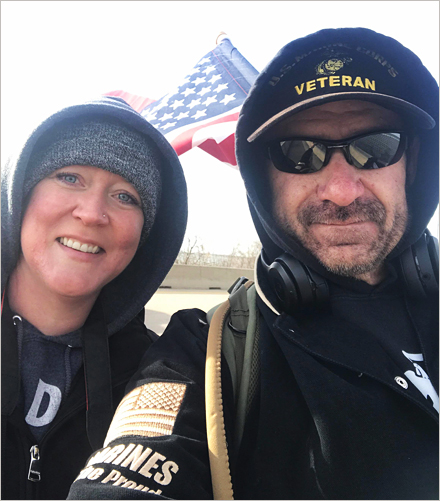 Please feel free to join Jeffery on the monthly 66 Bridge walks, normally held on the 22nd of every month. December’s walk will be held on December 19 at 6:00pm. Gray hopes to have a shutdown of the bridge someday to highlight a walk for awareness for veterans suicides.

Here is a list of outlets where veterans can get help and guidance from veteran organizations: