The Rockwall County Sheriff’s Posse invites the community to a Dedication Ceremony on Saturday, November 7 at 11 a.m. to name the Posse Arena in honor of co-founder Roy Hance.

Hance, along with former Rockwall County Sheriff Jacques Kiere, organized the Posse in 1991 with the approval of the Rockwall County Commissioners. Hance served as the Posse’s first Commander and was an involved member, serving the community until the age of 90. He passed away in the Fall of 2014.

Today, the Posse continues to be a valuable volunteer resource directed by Sheriff Harold Eavenson. While most recognize the Posse for its patriotic role in parades and special events, the skilled riders are organized under a military structure and well trained for public safety and emergency response activities. Public service duties also include parking lot surveillance at the home football games at Wilkerson Stadium and After-Prom Parties hosted by Rockwall-Heath and Rockwall High Schools.

“The Posse is capable of assisting law enforcement in a search event where horses can go, and most vehicles can’t,” explains Sheriff Eavenson. 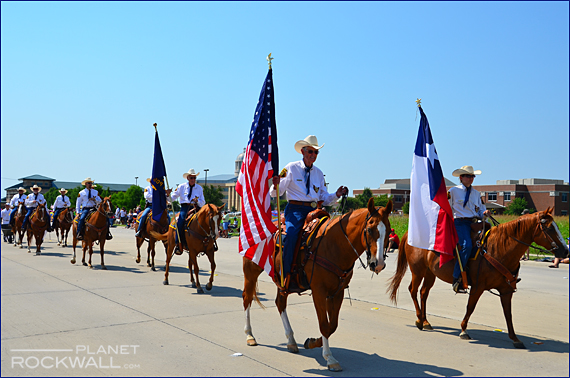 When the Space Shuttle Columbia crashed in 2003, the Posse went to East Texas and recovered a significant amount of crash debris by riding through the fields. The Posse is called out on missing person searches, and they are naturally the ones to handle the round up and containment of livestock that’s broken out of pastures.
In addition to local officials and members of the Posse, Hance’s wife, Randa, and son, Larry, will be attending the Dedication Ceremony. For more information, contact Commander Jim Wardlaw at 972-771-8602.