Nobody had seen him in town before. For the last few days, the stranger wearing green eyeglasses had been hanging around downtown inquiring if there was any land for sale in the area. Rockwall in the fall of 1876 was a very small town, and this man would have quickly caught the attention of the locals. As it happened, Alexander Starks, Rockwall’s first elected sheriff, was in a position to help the man. On leave pending investigation of a shooting he had been involved in a year earlier, Starks was working part time as a land broker and knew of an available piece of prime bottom land which would perfectly fit the stranger’s needs. They arranged to meet there for a showing.

The next day, Saturday, September 30, 1876, Alexander C. Starks was found on the property, dead with a load of buckshot in his head. The stranger with the green glasses was nowhere to be found. 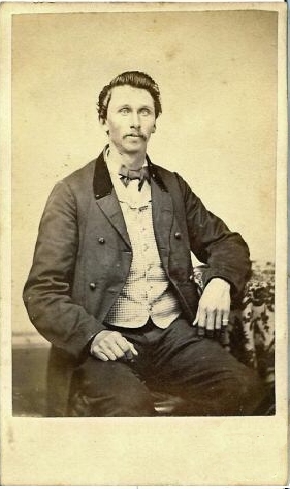 The only known photograph of A. C. Starks, taken shortly before his death.

The Rockwall of 1876 was very much the archetypical wild west town, a collection of clapboard shacks housing the usual general store, blacksmith, and a few saloons. The town had been part of Kaufman County until three years earlier, when voters decided the county seat of Kaufman was too far away given the state of the roads at the time. An interim sheriff was appointed until countywide elections could be held. Starks, a veteran of the Confederate States Army who had seen action in several Civil War campaigns, sought the office and was elected July of 1874.

In true wild west style, Rockwall was pretty rough around the edges. The arrival of the railroad was still four years away. The town was isolated and law and order was mostly a matter of frontier justice. Women and children were rarely, if ever, out on the streets after sunset. The nights belonged to drifters and hired hands who worked the ranches and cotton fields surrounding the community. The saloons did a brisk business and gunplay was commonplace, keeping the new sheriff quite busy on the weekends.

On a Sunday evening in May of 1875, Starks was called to break up a disturbance at a gathering of the Cannon family outside of town. It turned out to be anything but a routine call, and the sheriff was beaten and cut at the hands of several family members. Determined to make an arrest, he followed the men to a saloon where one thing led to another. When the gunsmoke had cleared, William Cannon lay dead on the floor. Starks was subsequently relieved of his duties until the incident could be thoroughly investigated. Eventually, the shooting was ruled justified.

Fast forward to the meeting with the mysterious stranger. Awaiting reinstatement to his former job, this was to be his last real estate showing. For nearly a year Starks’ murder remained unsolved. It was assumed the man in the green glasses was the culprit, but no trace of him was seen in the area since, and no motive could be surmised. To be sure, relations between Starks and the Cannon family had been understandably strained since the saloon shooting, but no connection could be made that would stand up to legal scrutiny.

A break in the case finally came in March of 1877 when, as reported in the Galveston Daily News, “the sheriff of Rockwall county received a letter from the sheriff of Lee county, stating that a man answering the description of the supposed murderer had been arrested in the little town of Giddings. Parties who had seen the man in Rockwall were at once sent to Giddings for the purpose of identification, and on being confronted with the prisoner, without hesitation pronounced him to be the man who wore the green eye-glasses in Rockwall, who left the town in company with Starks, and who is generally supposed to be his murderer. He will be taken to Rockwall for trial.”

The man, one George W. Garner, had a bit of a history with the law, having shot a sheriff in Giddings some time before. Letters were found linking him to the Starks murder, showing that he had been contracted by William Cannon’s father, Enberry Cannon, to kill the man who had shot his son. The payment for the deed as reported in the letters were $1,000, two horses and a wagon. That summed things up quite nicely and Mr Garner was tried, convicted and sentenced to be hanged in Rockwall in July of that year.

Garner was never to face the hangman’s noose, however. While awaiting execution in the Rockwall County jail, he was visited by his wife Martha. Evidently, it was not standard practice to search visitors, at least not thoroughly, and she was granted a conjugal visit for the evening. The following morning both prisoner and visitor were found dead in the cell. The cause of death was morphine poisoning. Next to them was a note confessing to the crime and implicating Enberry Cannon as the instigator.

Enberry quickly fled town but was apprehended some months later and brought back to Rockwall for trial. The case was eventually dropped for lack of hard evidence, and Mr. Cannon lived the rest of his days in Rockwall County. 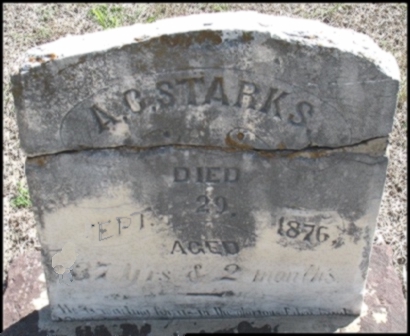 A.C. Starks was buried in Rockwall Cemetery, where his headstone stands to this day. It is not known what became of his surviving wife and children. No record of them has been found since the murder. In 1875, the original wooden county court house burned down along with early county records, those of the Starks family quite possibly among them. Similarly, records of the Cannon family have been lost to the mists of time.