Rockwall plays a “pivotal” role in Carter Hopkins’ debut novel, “The Lincoln Prophecy,” about a Southern Methodist University law professor who gets caught in the middle of a life-or-death fight against cyber terrorism.

Hopkins, a Rockwall resident and alumnus of Rockwall High School, drew his inspiration for the book while kayaking down a Rockwall canal near the San Martino Winery. A chase scene he envisioned at that location is the introduction to the novel.

The book deals with themes of privacy, security, patriotism and the motivation behind terrorism. Hopkins found inspiration from real-world cyber security threats like the “flame virus.” His experience as a lawyer working with a cyber security firm, and his favorite places in DFW, are major influences in the novel.

His next book, “The Scorpion Code,” is a historic novel taking place during the Civil War that is set to release soon. Hopkins is working on a sequel to “The Lincoln Prophecy.”

In a personal Q&A interview Hopkins’ shared insights into “The Lincoln Prophecy,” and becoming an author:

Q: What is the book about?

A: “The Lincoln Prophecy” is a cyber terrorism thriller about an SMU law professor, Riley, who lives in Rockwall. He’s out for a morning jog, and he stumbles across a murder. The murderer sees him at the scene, and it leads to a chase. Riley has to figure out why this person is murdered to save himself and avert this cyber security threat that he doesn’t know exists.

Q: How important is Rockwall in the story?

A: It all kicks off there. It’s where Riley finds the murder scene and it’s where the chase begins. It’s pivotal from that perspective.

Q: Why should people pick your book off the shelf over the one next to it?

A: I think, speaking for local people —Dallas, Rockwall, DFW area — it’s really fun to read a book with places you know and that you’ve been to or heard of. Dallas is definitely central to the book, and Rockwall plays a big part. Generally speaking, a good reason to pick up the book is the discussion about personal privacy versus national security. For me, it started with the Edward Snowden revelations. I learned how much information the government is collecting on average citizens. It’s that tradeoff. The government is always collecting information off of us. It poses a very viable question.

Q: Do you want this book to contribute to the national discussion of privacy versus security?

A: I hope so. There’s a lot of commentary on cyber security and how much information the government should have.

Q: Where does a book start in your imagination?

A: The Lincoln Prophecy started in a few places. When those few places came together in my mind, then it really felt right. It really started a few years back on a kayaking trip with my brother-in-law, near the San Martino Winery. There’s a channel north of town, off Highwy 205. Just before you get to the winery, there’s an irrigation canal that was built in the 70s. There’s a place where you get away from everybody and the trees arch overhead, and I thought, ‘OK, this is a good place for a murder.’ That stuck with me, and then we saw some people down there who looked shady. That’s where the seeds were planted. Then for the last few years I’ve worked with a cyber security company, so through my career I’ve really gotten to know the cyber security industry and I’ve gotten to see how things work. I started noticing various threats. There was one called a flame threat a few years ago. It was terrifying what the virus does when it gets into your system. That was the basis for the virus that comes up in the book. The third thing was Edward Snowden. Those three things came together and formed the story.

Q: Where does the title “The Lincoln Prophecy” come from?

A: There’s this letter that people thought for many years that [Abraham] Lincoln wrote. And (another theme in the book), I found it interesting that terrorists would take a perfectly valid text, like the Quran or other religious texts, and interpret it to their own ends. They’ll take it and they’ll just pull out of context and put their own slant on it to justify what they want to do. I thought that was interesting. So I found this letter from Lincoln that the terrorists leverage to twist what they’re doing into some patriotic effort. That’s what “The Lincoln Prophecy” is. It wasn’t some religious type of thriller, it was more political patriotism, so I used a historical text from Abraham Lincoln, an unquestionable hero, to bring out that theme, that terrorists will twist things to meet their ends.

Q: When did you decide to write fiction?

A: The first time I thought about it was in college. I went into my roommate’s room and said, “Hey, let’s play some ping pong.” We had a ping pong table that dominated our whole living space. But he said, “Nah, I’m doing something.” I asked what he was doing and he said, “I’m thinking about writing a novel.” That struck me as odd. ‘Can normal people do that?’ I thought people who were talented and super smart, those people did that. I thought that would be a really cool thing to try and do. Then it just stuck with me. Once I wrote this book, I realized how much I really loved it.

Q: Do you have a background in creative writing?

A: No. I’m a lawyer, so I do a lot of legal writing, but it’s super structured and professional and boring, relatively speaking. It was a steep learning curve. I’d never written fiction, and never something that long. In the legal world, there’s page limits on everything. This was freeing to have as much space as I wanted to be able to tell my story.

Q: Do you want to live off your novels some day?

A: I would love to. Being a lawyer is fine, but this is fun. Writing is super fun.

Q: How did you pick the locations?

A: The locations in Rockwall were just there. I didn’t pick those, they picked me. The rest of it played out for me as some of my favorite places show up. Ground zero for the Dallas side of the story is SMU. Riley is an SMU law professor. It radiates out from there, where the story needs to go. For example, there’s a scene where Riley goes back to campus to meet up with his friend, who becomes his love interest — there’s just a sprinkle of love in there, not too much. They met up and they’re going to lunch and he’s going to tell her what he saw with the murder. Where I went to lunch when I was in law school was Peggy Sue BBQ. Some of them were places where I went a lot. Later, there’s a chase scene where he hops on a bus from SMU to escape the murderer. I had to trace, where does this bus line go? I had never taken it. Sometimes the story is leading me to places and sometimes it’s the other way around.

Q: How did you write the scenes that weren’t in the DFW area?

A: There are some scenes in Washington D.C. at the end. There’s some climactic scenes, so my wife and I flew to D.C. and took some pictures. It was awesome. We had a good time. Doing that physical research was fun. I’d never done that, going to a location to set up a scene, see how it would play out. I’ve been to the Lincoln Memorial many times, but it’s really different when you are there to set up a scene. Where are people going to hide? Where are they going to run. I did a lot of Google Earth stuff, as well. Before we went to D.C., I said, “Okay, so here’s how they’re going to approach the memorial, and here’s how they’re probably going to get away.” Then when I got there, I walked that exact route and realized, ‘this isn’t going to work at all. This is the worst way for somebody to try to get in or out of this memorial.’ But I ended up putting that in the book, because Riley doesn’t know. He’s just a dude, a normal dude, thrown into this thing. In the book, he just did what I did. He said, “This is how we’re going to do it.” Then he realizes, ‘this isn’t going to work at all. This is terrible.’

Q: What was your favorite part to write?

A: I really love the local stuff. But it was all fun. But it’s pretty fun to imagine all this crazy stuff happening in DFW.

Q: How long did the project take?

A: When I decided, ‘I’m going to actually put pen to paper, I’m not just going to think about this,’ probably two years. Because I’m an outliner. I have outlines for my outlines. It’s crazy. I’m a little obsessive about that. I’m a lawyer. I have to be structured. I just put the scenes together, trying to figure out how you write something this long. I didn’t know what I was doing. The next book, when I started writing, it took me maybe three months. But I also knew I needed dedicated time, so I was going to do. This first one was rough.

Q: What is Riley’s biggest challenge?

A: The biggest challenge he faces is that he’s in a world he doesn’t know. He doesn’t know the inner workings of the government agencies that are pitted against him. He doesn’t know how much trouble he’s in. He has to overcome all of those things. He has to uncover all these things to figure out why this man is trying to kill him.

Q: Where does the character development for Riley come from?

A: I think with Michael Riley, the starting place is me. I put myself in all of these places and say, “What would I do to get out of this situation?” You have this huge character outline about this guy, and most of it’s not needed. Like, he’s a University of Texas grad, he teaches at SMU and I went there. A lot of his character is like me. He was my first main character so I just ended up putting myself in many of those situations. I had to learn to balance character development and plot. It’s a thriller and a thriller has to move. You can’t spend 30 pages talking about Riley’s background. This is a plot-driven novel, like all thrillers. The plot pulls the character instead of the character pulling the plot. You learn about these characters through the plot, but you don’t have 30 pages about his childhood.

Q: What should readers look forward to in the sequel?

A: The opening bit in the next book, which is tentatively called “The Prague Connection,” just a working title, starts with this eccentric billionaire. He ends up getting up murdered in Reverchon Park, which is downtown. His wife, an ex-super model, is initially charged with the murder. Riley is called in to help the defense team, then that murder trial ends up intersecting with a presidential election and a terrorist attack in Prague. He ends up getting caught in the middle of this. 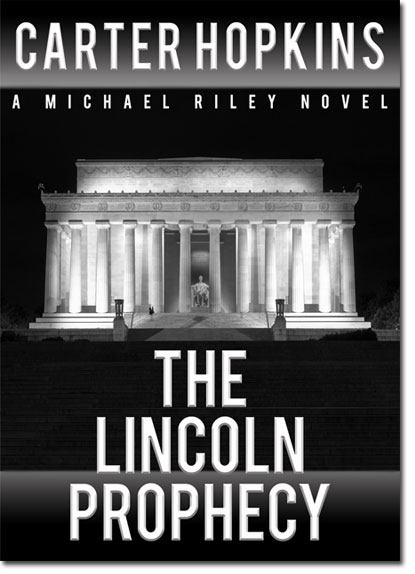 “The Lincoln Prophecy” is available at Barnes and Noble and Amazon as a hardback book for $12.99 and on Kindle for $3.99. Hopkins plans to have a book signing and meet and greet at the Half Price Books on Northwest Highway in Dallas next month. Details can be found on his website, CarterHopkinsBooks.com. He can be found on Twitter @CHopkinsBooks.