Sheri Fowler is a proud descendent of Rockwall’s pioneer families. Her children—Grace, a junior at RHS, and 19-year-old Jake who attends culinary school in Colorado, are the seventh consecutive generation of her family to have lived in Rockwall County. Although Sheri was born in Dallas, she has lived in her grandparents’ home since 2000 and is proud to call Rockwall home.

“It was a fabulous, wonderful feeling to bring my children back to a place I have called home and to raise them in this community,” Sheri enthuses. Her father, Don Stodghill, an attorney who was involved in Rotary and the Chamber of Commerce, encouraged Sheri to get involved in the community. In fact, he paid her dues and enrolled her as a member of the Historical Foundation. She has been on their board for the past eleven years and also served as president. Her passion for history led to her become author of: Rockwall, Rockwall Then & Now, and Royse City, and she is currently working on a new book entitled Legendary Locals. She is also the Chief Information Officer of Rockwall Independent School District. In addition, Sheri has been a member of: Friends of the Library, the Rockwall County Alliance for the Arts, the National Charity League, the Rockwall County Historical Commission, and the RISD Education Foundation. 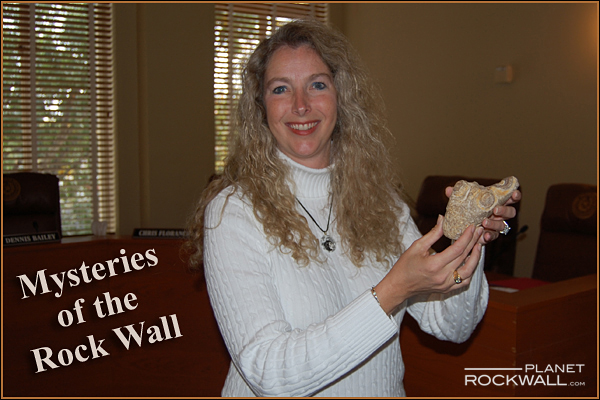 At the November 2010 Historical Foundation lecture, Sheri displays a mysterious stone (or artifact?)

In February 2013, Sheri was experiencing fatigue and nausea, but she tried to power through her exhaustion. By March she was in-and-out of doctors’ offices, having blood drawn and tests run, with no definitive cause for her symptoms. She assumed, as a 45-year-old woman with no previous health issues, that she might have an ulcer. But by the time of her follow-up appointment in August, she wanted answers. During the exam, her internist was able to detect masses on her liver and ordered a CT for the following day. Sheri told her fiancé, Stacy, that the tone in the room had changed dramatically, and she knew that things were serious.

“The next day, a few hours before my scan, I was in a meeting at work and missed a call from my mother. When I checked my voice mail after the meeting, I saw I had missed two calls. The first call was from my mother saying she thought she was having a heart attack. The second call was from Doctor’s Hospital saying that my mother was there,” Sheri remembers.

Her mother had indeed had a heart attack, was in the process of having a stent installed, and would then be in recovery for several hours. Knowing that it was critical for her to get to her CT scan and realizing that it was impossible to see her mother, since she would be in surgery, Sheri arranged for her daughter and her mother’s best friend, Sharon, to stay with her mom. Afterward, she met her daughter and friend at Chili’s for a quick dinner. While they were eating, Sheri received a phone call from her primary care physician who had been sent her test results by accident. Her doctor informed her that she had Stage 4 colon cancer which had metastasized to her liver and lungs. Sheri broke the news to Grace and Sharon by saying, “It is cancer, and we’re going to have to deal with it.” The trio decided not to tell Sheri’s mother, figuring that “one heart attack a day was enough.”

Because Sheri is so involved in the community, she made two big decisions when she was diagnosed with cancer. First, she chose to tell everyone she knew. “I have so many people in my life and so many commitments, that I needed everyone to know that I might not be able to be as involved as I would like.” Secondly, she decided to accept any efforts made to help her, as long as they were made in good faith. “I wanted to accept every story, good thought, or piece of advice from whoever wanted to help lift me up—no matter what their belief system. I wanted to get on every prayer list in the United States, because I knew we were in for a tough fight,” Sheri said firmly.

The challenge of the first few days was that Sheri’s son, Jake, was in Europe. She was terrified that someone would tell him about the cancer before she could. She left him a message to come to her house as soon as he landed at DFW. Her tone frightened him, and he was afraid something had happened to his grandmother. When he walked into the house with tears in his eyes, Sheri was sure someone had told him about her diagnosis. She said simply, “Mamaw’s okay, but I have cancer.”

“The doctors told me to get my affairs in order,” Sheri related. “The most common statistic about Stage 4 colon cancer is a 5-year survival rate of 5%. My goal is to be the 5%er.”

In her favor, most people with colon cancer are over 50, and Sheri was just 45 when she was diagnosed. It was one reason it was difficult for the doctors to figure out what was wrong. She has undergone 12 rounds of chemotherapy which has successfully shrunk the tumors in her lungs and is in the process of shrinking the tumors in her liver in order to make them operable. Since the liver can regenerate, once the tumors are removed, the projected long-term survival rate increases to 25-50%. Also in her favor is the support Sheri has received from family and friends.

“It’s great to have a brother as a super-hero,” states Sheri with a smile. “The minute Steven heard, he went into complete action mode to get me into the best doctors in Dallas. He and his wife continue to do everything they can for me.” Sheri’s fiancé, Stacy, took off work to be with her and has taken the burden of daily chores off her shoulders, so she can focus on healing. An aunt in California distributed 1500 hot pink SHERI STRONG bracelets to Sheri’s friends and family in multiple states, including in the office where she works. The bracelets provide visible, unspoken evidence of support for Sheri.

Sheri has received an unexpected outpouring of love from her community. “It’s been humbling. If a community could heal somebody, I would have been cured days after my diagnosis. I have kept every card,” she said with tears in her eyes. Although born and raised a Baptist, when members of the Church of Latter Day Saints from Heath offered to come pray for her, Sheri and her mother instead asked to come to them. It turned out that the Mormon congregation’s building is on land that was once owned by Sheri’s family, which gave extra meaning to their expression of love.

In addition, Sheri draws strength from living in her grandparents’ home. She remembered when she was 13, and her grandfather was undergoing open-heart surgery. The doctor sent a nurse into the waiting room to prepare the family for the worst when her grandfather’s aorta disintegrated on the operating table. The doctor did what he could but told the family there was a 2% chance that her grandfather would survive one hour. If he made it one hour, there was a 5% chance he would make it through the night. Miraculously, he survived 10 more years. Sheri has a picture of herself with her grandfather hanging in her bathroom that gives her inspiration every time she sees it. “I know if he could do it, I know that a miracle is possible,” Sheri says confidently.

But most importantly, Sheri has a positive outlook on the entire experience. She was excited to learn from her doctor that several women had made appointments for colonoscopies because of her diagnosis. “I have really tried to focus on how much good can come out of this. It’s so amazing that my situation could cause them to take an action that could save their lives!” She continued, “Every meal, every card I receive, I visualize as lifting the cancer cells out of me. I believe in the power of medicine, but I also believe in miracles. Why can’t it be me?”

Join Sheri Fowler and her friends and family as they raise money for Relay For Life, the signature-fundraising event for the American Cancer Society. Go to:
www.relayforlife.org/rockwalltx to donate or to learn more.