Saying that the participants in Saturdays Rib Rub & Run in downtown Rockwall take their barbeque seriously is a bit like saying that weve had a fairly warm summer – a major understatement. A quick look at the apparatus arrayed around Courthouse Square tells one that these folks are not your average backyard grillers. The impression grows strong that, for them, the art of smoking chicken and pork over a wood fire has become a way of life.

This years event was sanctioned by the International BBQ Cookers Association, whose aim according to their mission statement is “to develop and bolster equitable competitive Barbeque cooking internationally.” And the lengths each cook will go to be competitive is evident in the splendidly appointed rigs trucked and trailered in from all around Texas and neighboring states. 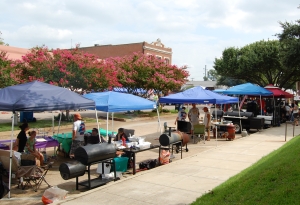 These arent some rusty barrels with hinged lids and smokestacks haphazardly welded together. Take for example the setup brought in by Saturdays overall winner, Troy King of Full Moon BBQ. From the gleaming chrome stack to the immaculate grill and smoker chamber, even down to the meticulously polished chrome trailer wheels, this rig just oozes pride of ownership. And his was no exception. Lavish expenditures of time, money and love were evident in a great many of the “pits” on display around the square.

Make no mistake, the competition is fierce, but the spirit of sportsmanship abounds as well. One contestant, a “newbie” to the sport, was faced with disqualification for quartering, rather than halving, his chicken entry (a serious breach of the rules, it turns out). His next-door neighbor, a seasoned veteran who knew better, offered to share some of his birds to keep him in the game. The offer was politely declined, but remains an object lesson in how to keep these things fun and friendly.

Judging consisted of three rounds of tasting in each category: chicken, baby back ribs, and spare ribs. Each entry was submitted in a plain white styrofoam box and assigned a random number. The boxes are passed around the tables of judges, who must evaluate appearance, aroma, flavor and overall experience. Each judge takes one bite and passes the box to the next judge. A rating of one to ten is assigned the entry, and the judge then cleanses his or her palate with water or crackers, at which point the next entry is presented, and the process repeats itself. Each judge had to taste anywhere from 15-20 samples, a requirement few seemed to mind. 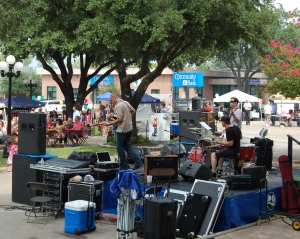 Music by Dallas Justin Cash Band was perfectly suited to the event, with its mix of rock, blues and oldies to keep the energy level high. An inspired instrumental version of “Norwegian Wood” was an especially big hit among Beatles fans in the crowd.

As busy as the judges were, none could touch event organizer and city Main Street Manager Bethany Golden. With 53 entrants to coordinate this year, up from 14 last year, she was not one to stand back and watch events unfold. From cleaning tables, to packing trash, to keeping the food flowing to and from the judges tables, there didnt seem to be a single task she wasnt willing to pitch in and do, from sunup to sundown. With dedication like this, there is no doubt that future Main Street events will be something to look forward to.