By all accounts, Meddie Bowles was the perfect housewife. She kept a clean house and was an excellent cook. Those who knew her especially loved her chocolate fudge.

Born July 30, 1902, the former Meddie Wood had married in her early twenties to Luther Bowles, some 25 years her senior. In December of 1949, Luther, known by friends and family as Mike, suddenly passed away at the age of 74. Cause of death was determined to be a heart attack. Many people from all over the area attended the funeral at the First Baptist Church in Rockwall. Sympathies for the grieving widow were in abundance.

There were, however, some in town who began to harbor nagging suspicions. As early as February, neighbors had begun voicing their concerns to authorities. Notably, Mike’s brother Sam started remembering a few things that didn’t seem to add up. By September of the next year, enough evidence had turned up to justify the exhumation of Mike’s body for further examination.

According to the September 29 issue of the Rockwall Success newspaper, “The body is alleged to have shown, upon pathological examination, evidence of strychnine poisoning.” Based on this and the testimony of several witnesses, the grand jury for the County of Rockwall indicted Meddie Bowles for the murder of her husband. Sheriff’s deputies arrested her at her place of business in Dallas.

Mrs. Bowles was interviewed several times by Sheriff W. J. Price in attempt to obtain a confession. Finally a written confession was obtained where Meddie admitted delivering the poison to Mike via her famous chocolate fudge candy. According to the confession, she had purchased the poison “under the pretense of needing it for the extermination of rodents.”

The Trial | Moved from Rockwall to Van Zandt County

Bail was set at $10,000, and Bowles’ attorney immediately began to object that the confession had been obtained under duress, charging that she had been confined for a week with little food. Nevertheless, a trial date was set for the following January. After arguing that a fair and impartial trial was impossible in Rockwall County, a change of venue was granted, and the trial was moved to Van Zandt County and a date set for July. After numerous postponements and continuances, Meddie Bowles finally faced her jury in May of 1952, nearly two and a half years after her alleged crime.

During the trial, Mike’s brother Sam testified as to what triggered his initial suspicion of foul play. On that fateful day back in December of 1949, Sam had come to visit his brother and his wife. He noticed two plates of fudge. One was on the table in front of Mike, the other on the fireplace mantle. As he reached for a piece from the plate on the table, Meddie stopped him, saying, “No, no, not that one. Let me offer you a piece from this plate.” The one on the mantle. After Mike died, Sam started thinking about that incident. He expressed his concern to the District Attorney, and the town rumor mill started to churn.

Mr. Cunningham, the owner of the local drugstore, testified about the strychnine purchase a few days before. Then came the evidence from the medical examination finding the poison in Mike’s body. The verdict from that point on was a foregone conclusion: “We the jury find the defendant guilty of murder with malice aforethought, and assess her punishment at fifteen years.”

Whether Meddie Bowles served out her full sentence is unclear. Some reports indicate that she served her entire sentence, but according to an article in the September 8, 1955 issue of the Canton Herald, she was granted a conditional pardon by Gov. Alan Shivers on September 1 of that year.

Why did she do it? According to friends and neighbors, all was not as peaceful in the Bowles house as outward appearances would suggest. Neighbors noticed the bruises on her arms, the ones she couldn’t hide beneath her clothing. After their son Billy left for the Navy, Meddie was forced to live in a tent outside the house, being allowed in only to cook and clean for her husband. She was only to address him directly as “Mr. Bowles,” not by his first name. She is quoted as saying, “My years in prison were far better than spending one more day with Mike Bowles.” Meddie Bowles continued to live in Rockwall until her death in 1978.

The Bowles’ gravesite can be found at the Rockwall Memorial Cemetery across from the police station on Highway 66. Visitors would not need a particularly sharp eye to note no date of death carved into Meddie’s side of the headstone. Given the intensity of her feelings toward her late husband, could it be that she opted not to spend all of eternity lying next to him and chose to rest elsewhere? We’d love to hear from anyone with the inside scoop on that. 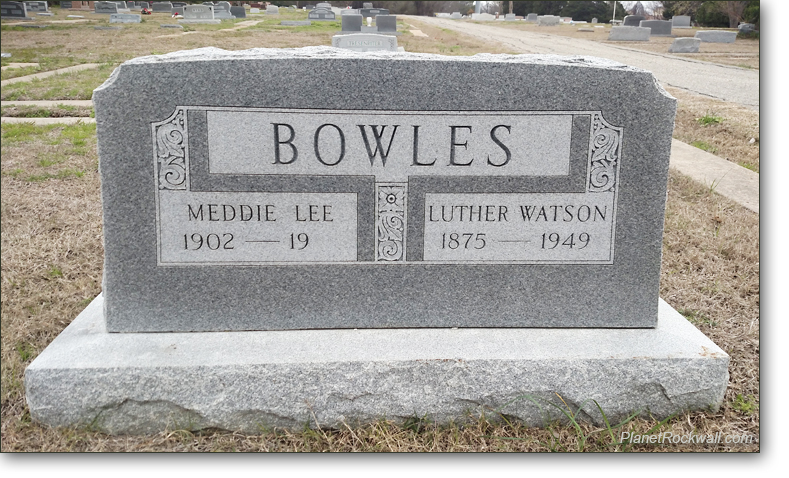 Meanwhile, fudge lovers would be well advised to think long and hard about how they may have treated the person offering up that next plate of sweet treats. Bon Appétit!