No other city in the world can boast a musical history as illustrious as Vienna’s. In a single afternoon, you can visit Haydn’s house, Beethoven’s apartment, and the Cathedral where Schubert sang as a boy. Or, for less than the price of a good bottle of Gruner Veltliner, you can immerse yourself in great Viennese music with the Garland Symphony Orchestra’s 2017-18 Season: “Vienna, City of Music”.

This concert will feature 2017 Cliburn competitor Rachel Kudo on piano, performing Weber’s Piano Concerto No. 2 in Eb Major. A winner of the Gilmore Young Artist Award, Rachel Kudo gave her first performances with orchestra at age 16, performing Tchaikovsky’s Piano Concerto No. 1 with the Fort Worth Symphony Orchestra and De Falla’s Nights in the Gardens of Spain with the Chicago Symphony Orchestra. She has since performed with the Warsaw Philharmonic in Poland and the RTE National Symphony Orchestra in Ireland, among others. She has appeared in recital at Chopin’s birthplace in Poland, Salle Cortot in Paris, Musikverein in Vienna, Tel Aviv Museum of Art, Aspen Music Festival, Dame Myra Hess Memorial Concert Series in Chicago, and Avery Fisher Hall, Alice Tully Hall, and Carnegie Hall in New York. Born in Washington, D.C., to Japanese-Korean parents, Ms. Kudo began studying piano at age 4 with Emilio del Rosario and continued at The Juilliard School and the Mannes College of Music. Her past teachers include Richard Goode, Yoheved Kaplinsky, and Gilbert Kalish, and she currently studies with Leon Fleisher. 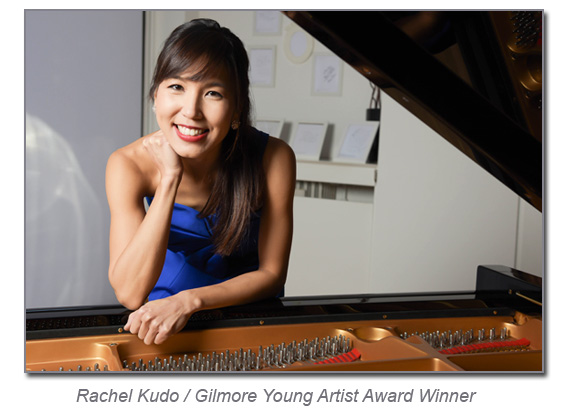 The concert will also feature guest conductor Piotr Sulkowski. A native of Kraków, Poland, he has served as Music Director of the Kraków Opera and Torun (Poland) Philharmonic Orchestra and is currently the director of the Filharmonia Warmińsko-Mazurska in Olsztyn, Poland. In addition, 2018 marks his Silver (25th) Anniversary as conductor of the young musicians in the orchestra of the Frederick Chopin State High School for the Arts in Kraków. Maestro Sulkowski has appeared as a guest conductor with the National Philharmonic Orchestra (Warsaw), Kaliningrad Philharmonic Orchestra (Russia), Orquesta Sinfónica de Navarra (Spain), Orquesta di Camera de Bellas Artes (Mexico), and Signature Symphony Orchestra (USA). In 2014, he received the prestigious Gloria Artis award from the Ministry of Culture and National Heritage for his contributions to music in Poland.